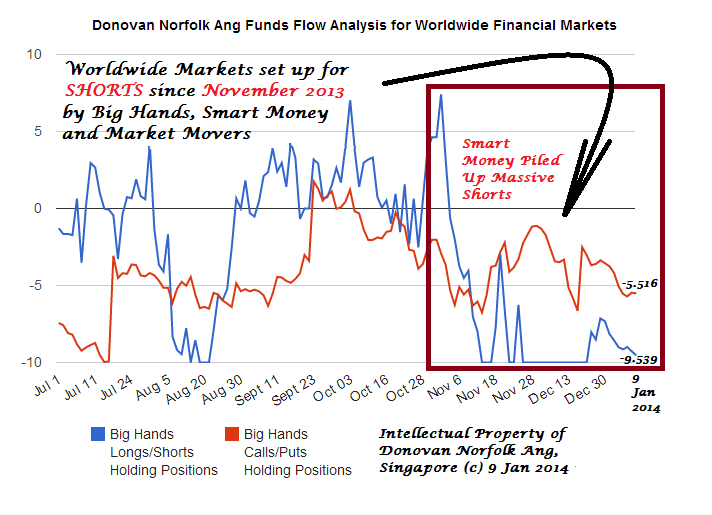 + Sixth trading day of 2014:
+ For yesterday, Big Hands created a rebound, however, they piled up even more shorts using that immediate rebound.
+ For today, Big Hands dumped again and piled up more shorts again.
+ Big Hands are dual shorts today: Added bearish puts and added shorts.
+ This is a show of confidence in shorts by Big Hands while retailers and small fishes are mostly buying stocks and equities from the Smart Money (Big Hands).
+ Big Hands have persistent Shorts Holdings and Bearish Puts Holdings since November and December of 2013.
+ The Puts are speculative and classified as non-protective.
+ Financial markets worldwide welcomed 2014 with sell-offs as per warned.
+ All the storm clouds, unusual volumes, technical analyses and funds flow analyses were pointed out to you before this major sell off.
+ November and December of 2013 were used by Smart Money to set up price actions for shorting the financial markets worldwide, while luring the herd to buy: were you one such sheep inside the slaughtering herd?
+ As forewarned before it happened too, world markets had used the Dow Jones Industrial Average DJIA for Algo-HFT trigger of sell-downs, i.e. DJIA 16600 points for triggering a world sell-off.
+ This Algo / HFT trigger has been realised with precision last week and the selling is on-going.
+ Worldwide markets are still bearish biased and this sell-down is still far from over.
+ Hot Money and Smart Money had, as also per warned in December, rotated away from Equities, Stocks and Bonds into the Metals Market (Gold, Silver, Copper, etc).