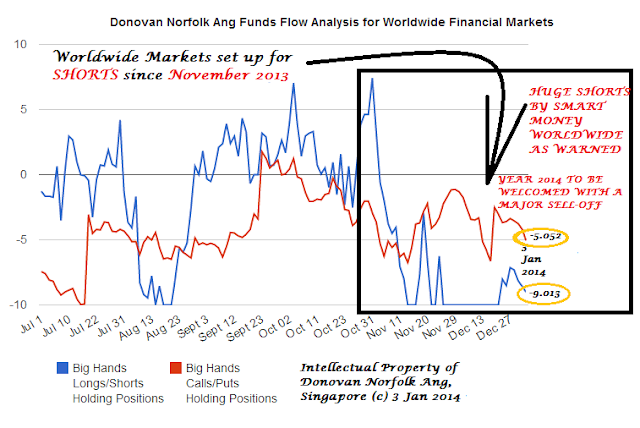 European markets are in the first 45 minutes of trading, while US markets (Dow, S&P500 and NASDAQ) are 5 hours 45 minutes away from opening for trading.

+ Second trading day of 2014:
+ Financial markets welcomed 2014 with nasty sell-offs as per warned on 31 Dec 2013 of major worldwide sell-offs to come once they open for trading starting from first trading day of 2014.
+ All the storm clouds, technical analyses and funds flow analyses were pointed out to you just before this major sell off.
+ In November and December of 2013, I also warned of Big Hands persistently accumulating huge SHORTS on financial markets worldwide while setting up price actions to lure the herd to buy: were you one such sheep inside the slaughtering herd?
+ For today, Big Hands are dual shorts for a forth consecutive day since end of 2013: Bearish.
+ Big Hands increased Shorts today.
+ Big Hands increased Puts today.
+ Big Hands have been persistently Shorts and Bearish Puts in November and December of 2013.
+ The Puts are speculative and classified as non-protective.
+ World markets had used Dow Jones Industrial Average for Algorithmic / High Frequency Trading trigger of sell-downs as per warned beforehand, i.e. DJIA around 16600 points to trigger the next wave of resumption in down-move.
+ This Algo / HFT trigger has indeed been realised with precision with a move close to 16600 points setting up the trigger.
+ Worldwide markets are still bearish biased and this sell-down is still far from over.
+ Hot Money and Smart Money had a;sp rotated away from Equities, Stocks and Bonds into the Metals Market as per also warned beforehand during end of December.

+ Financial Markets worldwide was said by me to be officially entering into critical stage from November 2013 to early 2014 (Tally with all your index charts, they are all at critical multi-year resistances).

+ Note that there was also unusual unloading volume in SPDR Morgan Stanley Technology Index ETF (read for implications on NASDAQ and World Markets) as warned on 29 Dec 2013:
http://donovan-ang.blogspot.sg/2013/12/spdr-morgan-stanley-technology-index.html

+ The following are the mid term sell-off correction targets as per analysed since 8 weeks ago with some new updates:
(you might like to refer to the accompanying detailed analysis links attached too):