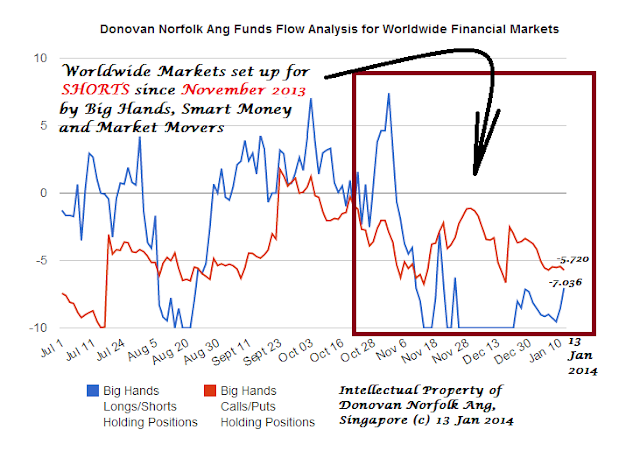 European markets are in the first 1 hour 30 minutes of trading, while US markets (Dow, S&P500 and NASDAQ) are 5 hours 00 minutes away from opening for trading.

+ Eighth trading day of 2014:
+ Japanese Nikkei futures index plunged more than -330 points today and Nikkei is expected to open gap down when it re-opens.
+ All other Asian markets executed a shorts consolidation for today but with bearish bias.
+ European markets are also doing a consolidation for today but with a bearish bias.
+ Big Hands worldwide are doing consolidation of their shorts.
+ However, the market movers have increased some puts for today.
+ The market movers still have persistent Shorts Holdings and Bearish Puts Holdings since November and December of 2013.
+ The Puts are speculative and classified as non-protective.

+ Bear in mind that November and December of 2013 were used by Smart Money to set up price actions for shorting the financial markets worldwide, while luring the herd to buy: were you one such sheep inside the slaughtering herd?
+ As forewarned before it happened too, world markets had used the Dow Jones Industrial Average DJIA for Algo-HFT trigger of sell-downs, i.e. DJIA 16600 points for triggering a world sell-off.
+ This Algo / HFT trigger has been realised with precision 2 weeks ago and the selling is on-going.
+ Worldwide markets are still bearish biased and this sell-down is still far from over.
+ Stocks and equities worldwide are still expected to sell off broadly, unless the particular stock has such strong fundamentals to withstand the broad selling.
+ Hot Money and Smart Money had, also per warned in December, rotated away from Equities, Stocks and Bonds into the Metals Market (Gold, Silver, Copper, etc).