From my live feed @ http://www.facebook.com/sakuragi.cnbc 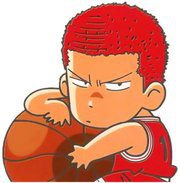 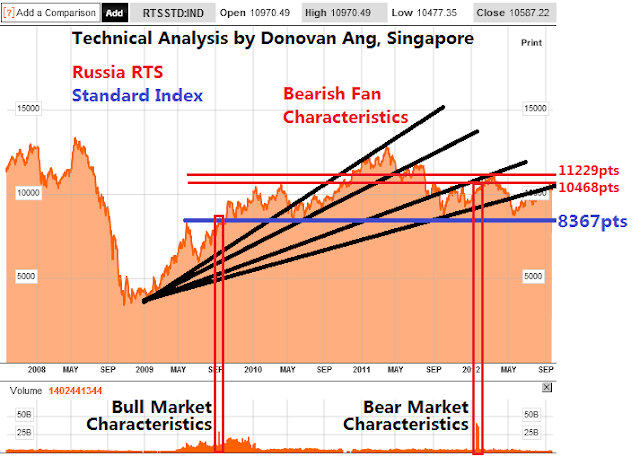 Only a break-up above the lowest frame of the Fan (Black Line Support-turned-Resistance) and the powerful RED resistance band at 10468-11229 points will negate the bearish distributional structure.

A break down below 8367 points will immediately bring about a heavy sell-down and double-confirm the bear market.

Based on structures, RTS (Russian Stock Market) and Russian Ruble currency is in an early stage of Bear Market.

Spanish IBEX had been on a short-sale ban.

Market Makers had restricted/banned shorting the Spanish IBEX for some time as Spanish government imposed a short-sale ban.

Recently, Market Makers opened up shorting platform for IBEX again. You could place your shorts on Spanish IBEX and market makers accept the shorting bets. Not surprisingly, Spanish IBEX charged up after that. Moral of the story? When you cannot short, the market dives into the Olympics pool. When it's time for them to push, the platform for shorting opens its doors and welcomes you with both arms.

Presently Spanish IBEX isn't the weakest market anymore.
It is the Hang Seng Index that is the weakest. The low profiles are where the attacks actually are. The high profiles (Europeans) are not where the attacks are. In the ancient Chinese battle strategies, the term is called "Calling for the East and Strike the West", which in this case here, calling for the West and strike the East.
Posted by Donovan Norfolk Ang at 9/21/2012 11:27:00 pm No comments:

The chart above shows USD Index breaking down the BLUE Support line which most technical analysts around the world sees. They are all bearish of the USD given the surface news (QE3) and shorted USD on news, especially when it is really convincing that USD is bearish with all the money printing. But is it really so?

If US prints, who says the basket of associated currencies cannot outdo US? Japan is already the first to outdo and outlast. Secondly, as mentioned in my previous articles that the final nail for Europe is coming, this means USD may be unexpectedly in high demand. Many opposing forces at work here certainly.

The problem with shorting on such convincing news is that the USD already broke down the BLUE Support 1 month ago in August 2012, and is at the Support area following the news. What does this mean? It may mean a massacre of the majority of market participants who view QE3 as bullish to financial markets and USD as bearish (including the high profile Daryl Guppy etc). Is it really the case? This had already been absorbed 1 month ago. The 5% insiders are always ahead and now doing opposite of the 95% who depend on news to be on the wrong side.

As of now, the financial markets have still not confirmed USD change of trend. USD remains in the over-looked RED Channel above. Furthermore, USD is now at a very important point indicated by the GREEN CIRCLE above, an intersection of TRIPLE strong supports. Only a breakdown below the triple strong supports will confirm a USD Bear. Otherwise, USD remains bullish and financial markets remain bearish.

At the triple major support, since many high profile analysts and majority of market participants are bearish on USD due to QE3, majority have shorted USD, and are bearish of it; because of this, there is a high probability of US Dollar rebounding from the current point (GREEN CIRCLE above), and carry on its up-trend.

It takes a lot of guts to be a contrarian of the market currently.

QE, Mortgaged Back Securities and Treasuries


Note that they are buying MBS, not treasuries (other than a bit of the long-dated via Twist); if they buy many more treasuries, the Fed will own such a large number of them that large parts of the treasury market will have no international liquidity left and will stop functioning properly.

Now given that in addition to that being a disaster on its own, at a basic level treasuries are the foundation of the financial system. Huge numbers of transactions involve treasuries as collateral. No treasury equates to no collateral; similarly, treasury illiquidity equates to weak collateral. They know this fact, hence the announcement of open ended but no finite dollar amount pledged in. This is actually very different than if they had announced a $800bn QE3, locking themselves into that amount. It is not quite possible that they can actually buy that many without imploding the market. They have a bit of leeway with MBS but there is also a finite market there.

In other words, rather than seeing this as infinite QE, it can be regarded as indeed the announcement that they are going all in and throwing in the kitchen sink, yet basically they are trying to keep people from realising they actually do not have a kitchen sink. It is more of psychology/jaw-boning than anything,

Note:
*QE3 is about using MBS (a much more finite market than Treasuries) to inject liquidity, and QE3 is not about using Treasuries to inject liquidity. There is no kitchen sink to throw.
*For financial markets and effects to economies, LDMR negative returns will set in (refer to previous write-up: http://donovan-ang.blogspot.sg/2012/09/spx-correlation-with-qe1-qe2-ot-and-qe3.html).


Law of Diminishing Marginal Returns:
Negative Returns Are Going to Be Priced In
Posted by Donovan Norfolk Ang at 9/19/2012 09:45:00 am No comments: 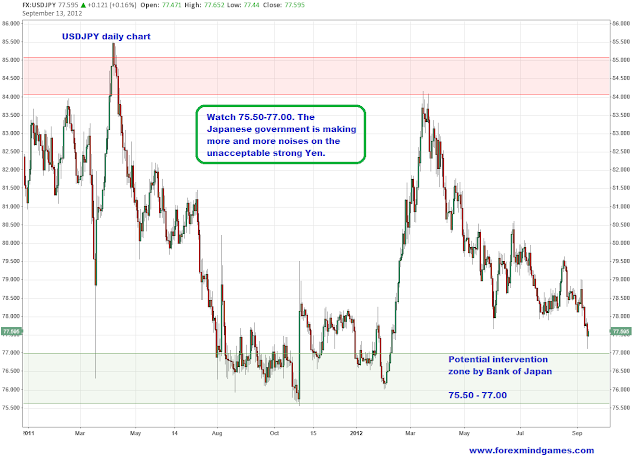 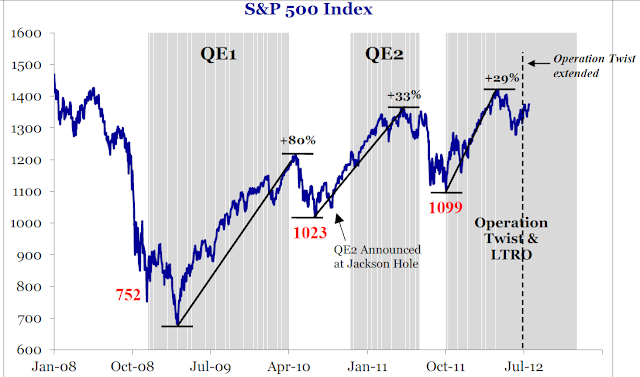 The Law of Diminishing Marginal Returns at Work

The following shows the SPX correlation with QE1, QE2, OT and lets us have a rough guide of how QE3 would be like.

In Economics Theory, there is always the Law of Diminishing Marginal Returns (LDMR). When the maximum marginal returns has reached, the returns start to get less and can potentially turn into negative returns with each increment of a specific X.

The SPX is currently behaving with all the characteristics of the LDMR.

When too much money floods the market, it is initially good, as it can depress the interest rates and stimulate production. Incomes increase while inflation levels are subdued in a recessionary economic environment; however, the effect becomes less and less with each flooding operation (Q.E) as can be seen from the SPX chart (Cost of Production C.O.P eating up growth); flooding operation will reach a point where negative returns set in, which in this case, the now over-excessive liquidity-stimulated inflation (on oil, raw materials for production, necessities) will maliciously eat into growth, corrode GDP, evaporate employment, and spark another depressing vicious cycle even though interest rate can still theoretically remain low. The negatives will  flex over the positives which is the point LDMR sets in.

Before the QE3 was implemented, the media and majority of funds worldside had already anticipated it. Likely, QE3 has been absorbed by the market in the several weeks leading to the QE3 announcement, and the market may need to start pricing in the negative returns now. This will go with market selling/distributions as oil spikes up and while majority of market herd (retailers/small fishes/investors/everyone with experience in QE1 and QE2 expecting market to continue to rally) are buying into it. Classical conditioning at work is often what kills majority of market participants because they are already brained-washed based on the previous two or three histories they had.

The relatively good or steady performance in financial markets should, at best, tide until the US presidential election. At worst, selling may start before one even anticipates it. During this time to presidential election, it is highly likely that Big Hands and Insiders are engaging in distributions and secret sellings/off-loadings to majority of market participants/investors, who are still classical conditioned based on their experiences with QE1 and QE2. They may find that their experience with QE3 or QEx differs from what they would expect as market likes to do the opposite.

Midas: A China Infrastructure Play, Free Money is dropping from the sky now, grab it before it rockets more
(Midas: 9 September 2012, Sunday, 1.10pm)

Based on Donovan's Technical Analysis, Midas 44cents target is a guarantee, assuming ceteris paribus.
Based on price-volume analysis, there is also a very high chance that upon hitting 44cents major resistance, Midas will retrace slightly before blasting past 44cents resistance. Advanced Technical Analysis signals Big Hands are already in Midas. Based on my judgement, this is what I would label as free money dropping from the sky. Grab and laugh all the way to the bank.

Blasting past 44cents will result in a new bull market trend for MIDAS.

Note that this is a China Infrastructure (Rail Road) Play. It is one stock that will be independent of big markets directions due to fundamentals and government policies. The Technical side suggests re-accumulation had been completed and a pump-up action to take over now.

Email ThisBlogThis!Share to TwitterShare to FacebookShare to Pinterest
Labels: Midas

What a week we had last friday with Bernanke's speech at Jackson hole eh? The volatility was extreme, up and down 60pips within minutes.
For this coming week, it is a tough call. I do not know whether to be a bull or bear. The price action is calling for both directions!! Why? Lets begin with the daily chart. The daily charts shows a bearish price action.
On the daily chart, we see:
1. Price action is bearish with a clearly defined falling channel with 3 confirmed points
2. Price is touching potential point 4 for this week
3. Pivot zone resistance from 15th Jan 2012 at 1.2650 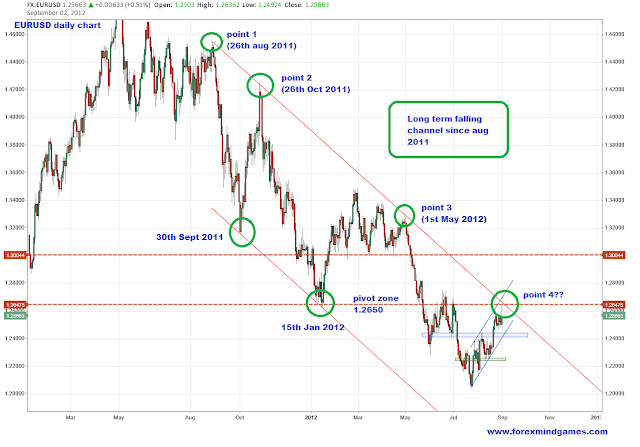 Euro USD (EURUSD) Daily Chart
On the 4hr chart, we see:
1. Price action is bullish with a rising channel with also 3 confirmed points
2. 1.2420-40 could be a new support zone 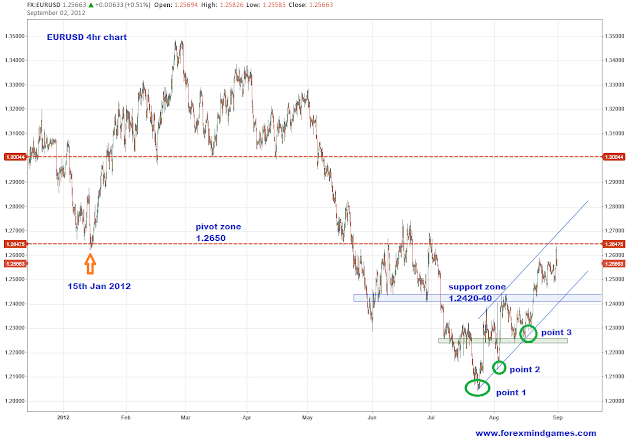 
The following quality article is contributed by FMG who is an active forex trader. He is also the webmaster of http://www.forexmindgames.com/.