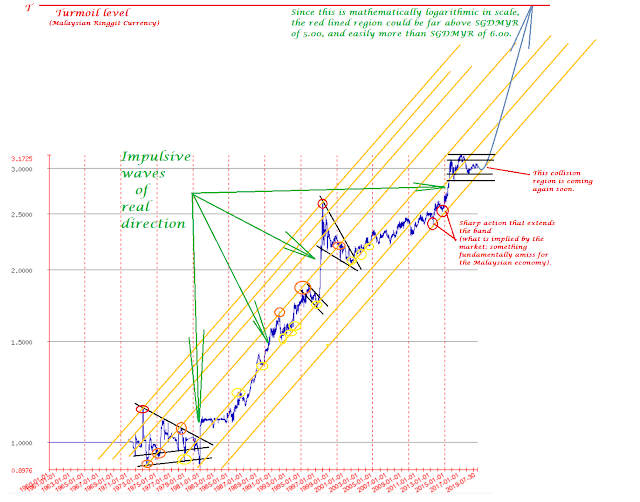 Super Cycle of SGDMYR:
31 July 2019, Wednesday
(Click on the Technical Chart Above to Expand)

Attached is the SuperCycle Technicals for SGDMYR, i.e. the Singapore Dollar priced in Malaysia Ringgit. Upmove in SGDMYR chart means Singapore Dollar going up against Malaysia Ringgit, or alternatively it also means Malaysian Ringgit going down against Singapore Dollar. Observe the red circles, orange circles and yellow circles to know why this is a high quality technicals as charted. The Malaysian Ringgit is on its way towards the collision region soon, as illustrated on chart. Since the technical chart is mathematically logarithmic in scale, the red lined region representing Turmoil Level could be far above SGDMYR of 5.00, and easily more than SGDMYR of 6.00.

Email ThisBlogThis!Share to TwitterShare to FacebookShare to Pinterest
Labels: SGDMYR 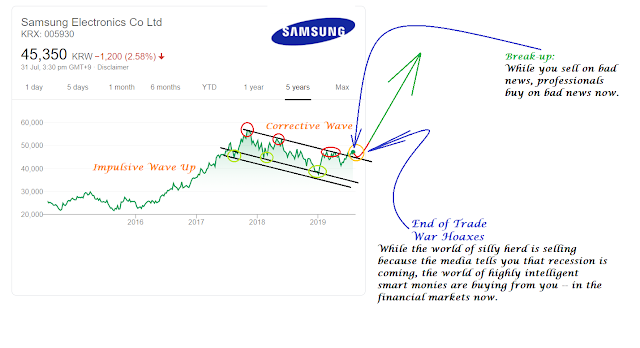 Samsung Electronics (Listed in Korea and UK-London):
31 July 2019, Wednesday
(Click on the Technical Chart Above to Expand)

Attached is the Technicals for Samsung Electronics. The corrective wave has ended with a break-up in the orange circled region as shown. The impulsive wave as illustrated is resuming. This also has certain implications. In the chips, technology (TECH) and electronics industries, the impulsive wave up is resuming now. While the world of silly herd is selling because the media tells you that recession is coming, the world of highly intelligent smart monies are buying from you -- in the financial markets. While you sell on bad news, professionals buy on bad news strategically. The worst is finally over for chips, semiconductor and hardware-electronics sectors. The trade war is no more.

Attached is the Technicals for Singapore Straits Times Index (STI). The final brown circled region is the backtest of critical resistance-turned-support with success. The backtest confirmation of huge bull market was achieved using trade war as the fake smoke screen, i.e. to throw the 90% market herd majority into disarray and run for shelter while markets are to dump them behind. It is also an operation to lure market majority to short-sell the financial markets. Most people had already sold, left, short-sold or gone into bearish recession mode. The Straits Times Index is ready to go beyond 5000 points. As Singapore is world's barometer for financial market performances, this also means worldwide equity markets are going to hyper rally. 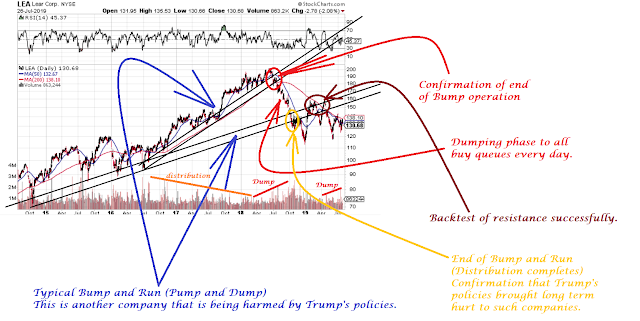 Technicals of Lear Corp (NYSE: LEA):
27 July 2019, Saturday
(Click on the Technical Chart Above to Expand)

Attached is the Technicals of Lear Corp, an auto parts company that is listed in the NYSE.
This is another example of companies that are hurt badly by Trump's trade policies. Bump and Run lines are illustrated in black. First red circled region is where confirmation of end of bump operations ended. Dumping phase is technically illustrated by 2nd red arrow as shown on chart. The light-orange circled region is where end of bump and run distribution occurred, based on technicals and volume flow. This would be followed by large downtrend in price actions. The dark brown circled region is where backtest of support-turned-resistance confirms much more bearish move down to come for this company (we can expect more bearish corporate results to come for this company). The series of volume flow as illustrated will triple confirm that there will be more bearish moves by smart monies on Lear Corp. This would make for a great short-sell stock to protect (hedge) one's portfolio of longs investments/holdings.

Updated Technicals of Wilmar International:
23 July 2019, Tuesday
(Click on the Technical Chart Above to Expand)

Attached is the Updated Technicals of Wilmar International. Wilmar has completed the huge rounding bottom of massive accumulation. This is a brew for very large wave up. Palm oil and palm oil stocks worldwide are looking at this industry leader closely too. Wilmar is now ready to rally big time to way beyond $8.00 a share -- possibly to double digit in prices, i.e. >$10.00 a share. Only a rally to beyond $10 a share will make the huge massive accumulation (See Volume Flow in Chart) worth it. 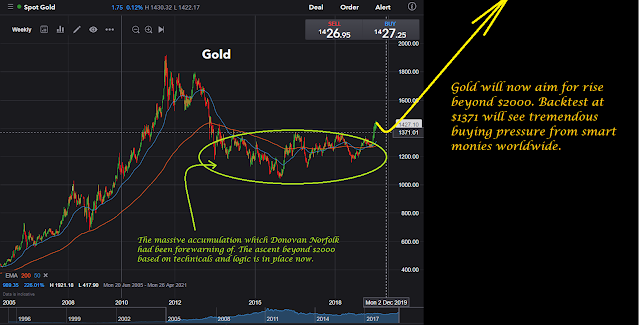 Attached is the macroscopic Technicals for Gold. As per reiterated in the past years:

1. When stocks are bullish, Gold will rise with the bull markets gradually to beyond $2000 an ounce.

2. When stocks are bearish, Gold will rise sharply beyond $2000 an ounce. Gold's super ascent is assured based on technicals and the dynamics of the current economic cycle.

3. Gold's rise to backtest a previous $1550-$1600 (previous neckline) resistance was a guarantee based on standard technical model.

Lastly, because Gold's re-accumulation (see region in light green) was very massive and deliberate, $1550-$1600 resistance will crack easily. An investment target price of $2500-$3000 can be expected based on technical projection. Any backtest at $1371 will see massive buy pressure from smart monies worldwide. This would be the next buy adding point before the next great rise. 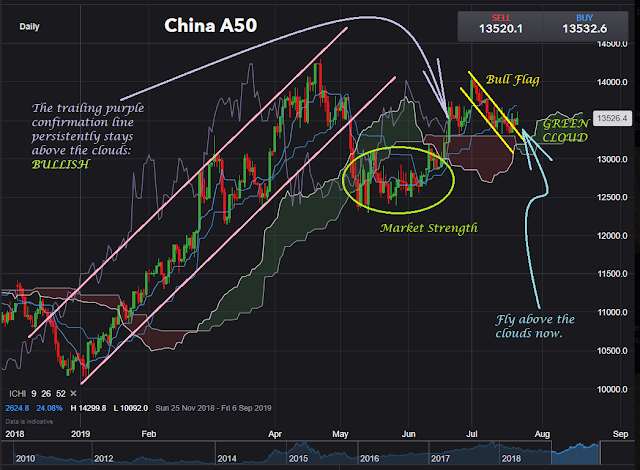 China A50 Index reflecting the Chinese Stock Markets:
22 July 2019, Monday
(Click on the Technical Chart Above to Expand)

Attached is the updated Daily Technicals of China A50 Index. China markets are one of the weakest in the world, and even it is showing strength when most analysts and majority of the markets are bearish in outlook. The yellow lines depict region of bull flag which had achieved short term breakout. The mid term is a consolidation, while the long term remains uptrend. Although many people are talking about technical recession for most markets worldwide, we are not in any bear market nor true recession. Markets will even super rally and dump market majority behind. The trailing line in ichimoku is even persistently above clouds and currently we are seeing green clouds for the lookahead. The green circled region is where clouds deliberately support even weakest markets.

Outlook for worldwide markets: Bullish
(When even weakest is supported with buying pressure, everyone is on rising tide that lifts all boats high). 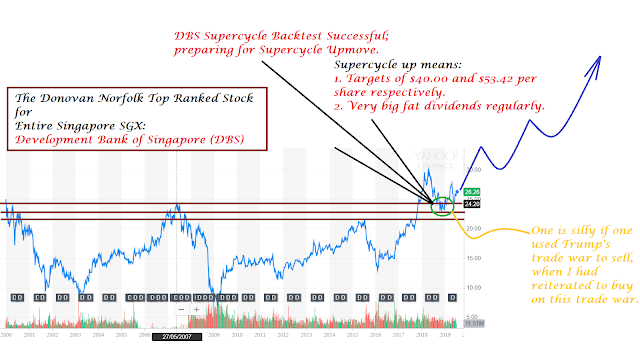 Development Bank of Singapore (DBS):
17 July 2019, Wednesday
(Click on the Technical Chart Above to Expand)

Attached is the updated Technicals of Development Bank of Singapore (DBS) that is listed in Singapore. It is the Donovan Norfolk Top Rated Stock of Singapore. DBS has successfully tested the Supercycle resistance-turned-support as indicated. DBS is preparing for Supercycle upmove. Supercycle upmove means: 1. Targets of $40.00 and $53.42 respectively; 2. Very big fat dividends very regularly. The green circled region highlights, based on technicals, how one is silly if one used Trump's trade war to sell. 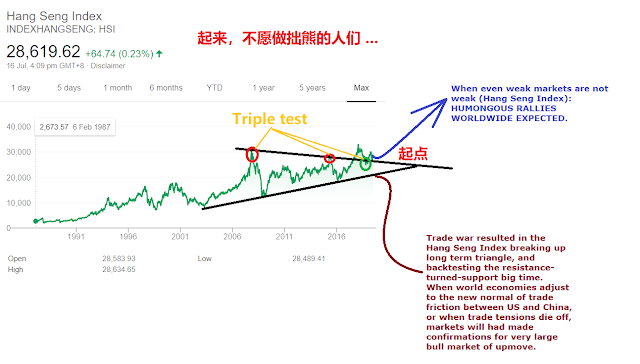 Hang Seng Index:
16 July 2019, Tuesday
(Click on the Technical Chart Above to Expand)

Attached is the updated Technicals for Dow Jones Industrial Average. The first brown circled region is my December 2018 live fore-warnings to buy on the fear while everyone shorted, sold or called to exit the markets. I had forewarned of hyper rallies when the 95% herd were filled with fear. DJIA has now rallied more than 5000 points per contract since my forewarned analyses. The 2nd circled regions were my reiteration to keep buying even when we entered into 1st two weeks of January 2019. Markets have since buoyed beyond my buy points. The DJIA has now further broken up the orange resistance, even making 2 weeks of backtests for this breakup. Refer to technical chart to know what this means. The breakup confirmation has also been achieved last week. Most people had been bearish and shorting equity markets right now. All the more better. 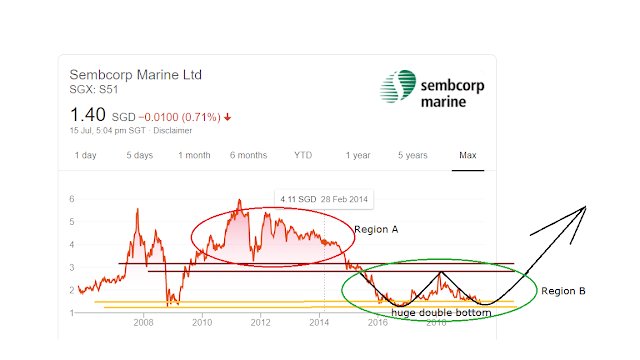 Sembcorp Marine:
15 July 2019, Monday
(Click on the Technical Chart Above to Expand)

Attached is the updated Technicals for Sembcorp Marine that is listed in the Singapore SGX. Sembcorp Marine is currently at the secular cycle support and attempting to consolidate in a long term big double bottom as a new trajectory. This is illustrated in as Region B on technical chart. Region B price range (accumulation) is coincidentally a price satisfaction on Region A distribution. The entire series of trajectory is now not only symmetrical in price action Y-axis, it is now approaching symmetry in X-axis time line as well. This means Sembcorp Marine will resume its large uptrend from here, i.e. it is likely to break up $3.00 resistance (+100% profits from here), and eventually re-test $6.00 resistance. We are still in large bull market worldwide which will raise almost all boats.

Attached is the Technicals for Lendlease Group which a number of people had bought and asked me about it today. The below are my opinions and for your learning:

Firstly, I had reiterated before that I do not like property stocks in general under the current economic cycle for which the interest rate cycle is not conducive to property companies and property construction companies.

Secondly, I had reiterated many times that, in my opinion, Australia will be economically punished by China -- the largest trading partner of Australia when it comes to GDP/money-making for Australia. While US is able to give economic sanctions, China does the same too. In China's perspective, Australia was instrumental in pushing the US to block and ban Huawei, and this caused China and Huawei immense losses which would not be forgiven by China easily -- this is not difficult to deduce based on logic.

This means Chinese monies which were mainly responsible for the largest and longest economic boom of Australia is a "goodbye for Australia" now and within the next few years too. So will be the same for Aussie Property Markets.

Next, look at Australia's key trading partner statistics below to know how economically important China is to Australia:

The technical chart of Lendlease Group further supports my point. All illustrations are as attached on technical chart. Key points on technical chart -- impulsive wave is down (true direction); corrective wave is up (fake direction); breakdown of large dead cat bounce channel in brown which took its time to suck in immense amount of fools' monies, followed by impulsive breakdown below brown channel's dead cat bounce; subtle supercycle down for Lendlease Group LLC as shown on chart; current execution of subtle dead cat bounce which continues to suck in fools' monies. This is a red-flag stock. There is another at least -50% wealth destruction for this company.

The following is a generalised extrapolation of my thoughts:
This is a company which is a company within an entire industry (and possibly industries) being punished quietly by the very rich Chinese State Corporations and Chinese Monies who felt the pinch from the American Trade War. While China has to be more restrained towards US, the same cannot be said for Australia (especially when China lets Australia earn a lot of money, and does feel the sharp pain because of Huawei now, and Australia was recognised by China as one of the major contributors to this Huawei/5G jeopardy and pain).

All in all, because of the numerous deduced logic based on all the events until now, Australia and Australian currency are not expected to perform well at all in 2019, 2020 and possibly 2021 when compared to ASEAN or other emerging markets which had managed to stand neutral in the trade war. A wrong move caught in between the bouts exchanged by the 2 giants of US and China will normally land oneself into Intensive Care Unit (ICU). Unfortunately, Australia happened to walk in, and then become an unfortunate casualty.