Singapore Straits Times Index: What to expect next? 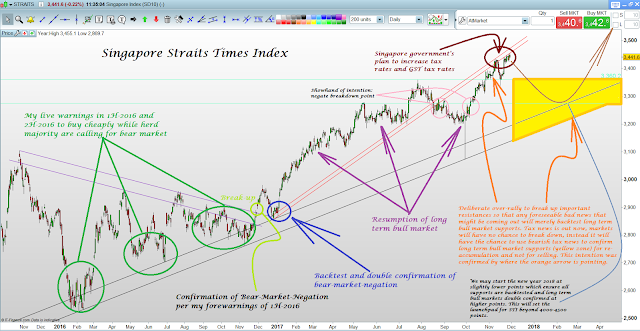 Singapore Straits Times Index: What to expect next?
29 November 2017, Wednesday, 12.21pm Singapore Time
(Click on Technical Chart Above to Expand)

Attached is the technicals for the Singapore Straits Times Index. The green zones are my live forewarnings in 1H-2016 and 2H-2016 to get back into the financial markets cautioning before prices move that the sell-off would be about to end (amidst widespread bearish conviction among the herd). The light green zone is the break-up per my forewarnings. The purple arrows are series of major waves that markets made right after my bullish forewarnings. The pink zones are international financial markets' show of intentions in 2H-2017 to absorb all breakdowns and carry on positive momentum.

Now comes the more important points and the look-ahead. The Singapore markets deliberately over-rallied to break up the turquoise coloured classical band of support at 3274-3360 points just before market-dampening news of increment in tax rates and increment in GST tax rates came out. This ensures that once the market-negative tax news is out now, markets will have no chance of breaking down critical supports; instead it will have the chance to use these bearish tax news to retrace and confirm long term bull market supports (yellow zone).  The movement is for re-accumulation and adding of positions using bearish news (while public would be pessimistic) and not for selling. This intention had already been confirmed by where the orange arrow is pointing.

On macro-technical conclusion, we will start 2018 at lower points with respect to November-December 2017 price-action points. In doing so, this ensures that all supports are back-tested and long term bull markets are double confirmed at higher points by the time markets open the new year 2018 at the retraced yellow zones. Once the new year 2018 starts, a new wall of worries would had already been erected for the weak-minded traders and investors, and quite a handful of market investors would be shaken out again. This is good. This will henceforth set the launchpad for Straits Times Index beyond 4000-4500 points. US financial Sector (refer to previous analysis of the SPDR Financial Select Sector) will continue to provide north-bound fuel for worldwide stocks and equities markets. 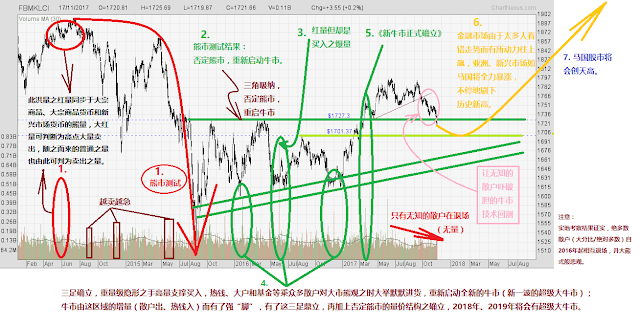 Attached is the technicals for the SPDR Financial Select Sector. It is worth reiterating that if you are an investor or trader in the financial markets, you have to know that starting from 3Q-2017, major gap-ups in the US Financial Sector will now almost always yield fast significant rallies in worldwide banking stocks (refer to previous analysis as attached below for reference). In Wall Street, financial and banking stocks had been resilient in doing any correction for the past week (refer to sector ranking beside technical chart). In fact, in the 1 day performance ranking of the sectors, the banking/financial sector as a whole does not want to chalk up much negativity to the 1-week corrections anymore. Bank stocks and financial stocks worldwide are preparing to super rally again. Load more bank stocks on dips, any bank stock from any part of the world will all continue to super rally.

For those who are in short term swing/position trading, WTI light crude oil will be doing short term healthy correction within a long term uptrend. The expected trajectory is illustrated as above. As the previous ascent in crude oil had been too steep, the reversion to mean is expected to take place. $51.00-$52.00 ichimoku cloud supports are expected to be backtested before long term uptrend can resume. Crude oil related stocks worldwide will use the above crude oil technicals as a guide in their movements. Short term healthy retracement with long term energy bull expected to carry on in 2018. 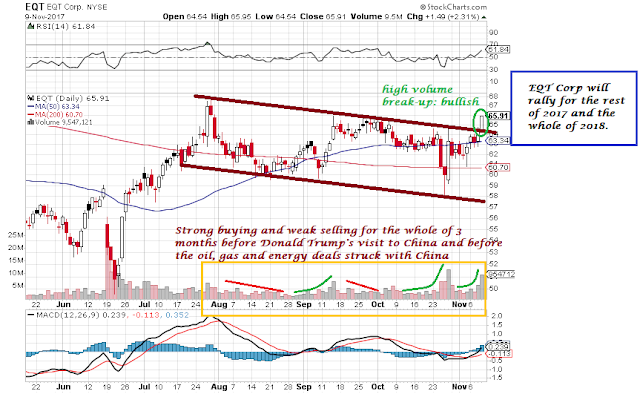 Attached is the technicals for EQT Corp listed in the US Market (NYSE: EQT). This is in tune with the following theme: "US-China Cooperation and Oil, Gas and Energy Deals of November-2017".

There existed strong buying and weak selling for the whole of three months before Donald Trump's visit to China and just before the Oil, Gas and Energy Deals struck with China (refer technicals on chart). There is also a high volume break-up of mid-term channel now -- bullish. EQT Corp will rally for the short term, mid term and long term. EQT Corp will rally for the rest of 2017 and the whole of 2018.

US-China Cooperation and Energy Deals:
10 November 2017, Friday, 7.37am Singapore Time
(Click on Image Above to Enlarge)

US energy companies opened low and ended high yesterday. This is why I had stressed several times yesterday that smart hedge funds, including mine, will be closely watching US President Donald Trump's visit to Asia and, in particular, to China.

The most glaring focus as of now is the oil, gas and energy deals struck between the 2 superpowers. US seeks to increase exports of its natural gas. The attached above are the immediate list of energy companies that will have their stock and equity share prices significantly higher than where they are currently, starting from yesterday 9 November 2017. It is worthwhile to shortlist these stocks for intense buying and investing.

Come 2018, the stock prices of these companies will be rallied to much higher grounds:

Email ThisBlogThis!Share to TwitterShare to FacebookShare to Pinterest
Labels: Energy

Attached is the technicals for Genting Singapore, a casino stock that is listed in Singapore SGX. The red circled region and before are the years of 2011 and 2012 where I gave live analyses and live forewarnings calling for short-sells and sells on Genting at $2.20, $2.10 and $2.00 respectively. The year 2014 (red circled region) is where I gave calculations, analyses, and live forewarnings calling for Genting to plunge severely to 86cents region to end its downwave (refer to past time-stamped track records on analysis site).

The yellow boxed region is where Genting made a bottom and huge accumulation at below 86cents support line (hiding under support line for re-accumulation using fear), true to my forewarnings of year 2011-2012 and year 2014. Genting consolidated in year 2015 and 2016.

The 2 green circled regions are my live warnings on 8 September 2016 and 24 January 2017 calling for big maximum bullish reversal and to do massive buys on Genting at 76.5cents and 94.5cents respectively (refer to these 2 analyses in my analysis site). This was in tune to my live forewarnings back in 1H-2016 and 2H-2016 that worldwide markets will suddenly negate bear market technical price structures and execute massive bullishness from 2016 on, despite public sentiments being very negative.

Genting has currently executed a very high volume gap-up, holding of the gap-up and continuing to rally strongly after this gap-up. This is a strong show of bullish intention to rally a lot more. $2.00 would be the next psychological target, and I will expect Genting to rally much above $2.00 easily, like a hot knife through hard butter (at least more than +200% profits from this safe stock by then). 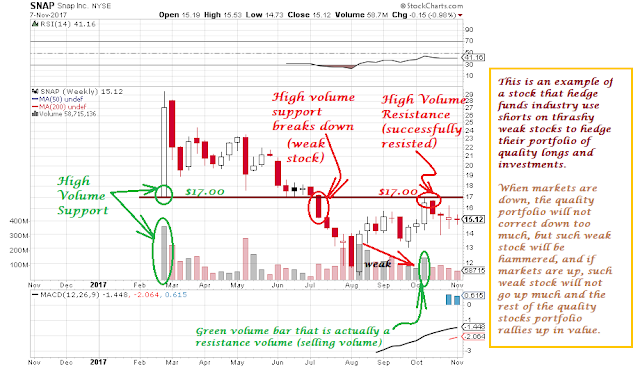 Attached is the technicals for SnapChat (NYSE: SNAP) using Professional DNA Volume Analysis. The first trading day of the IPO set up a benchmarked $17.00 for future reference as to whether this stock was a pump and dump distribution stock or a quality accumulation stock. The $17.00 is a high volume support formed by the base of the bullish white candle. As it turned out, this stock suffered a breakdown in July 2017, weak rebound in August and September 2017 and a high volume green bar that merely back-tested the resistance as a resistance volume (green bar selling volume). This becomes a technical certification that the stock is a sell-stock and the IPO had been pumped and dumped.

This is an example of a stock that hedge funds industry use shorts on thrashy weak stocks to hedge their portfolio of quality longs and investments. 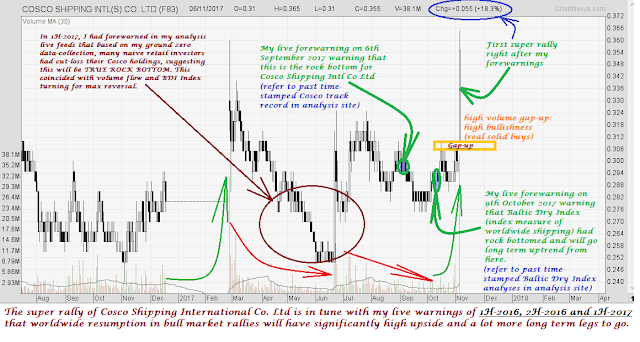 Attached is the technicals for Cosco Shipping International Co Ltd. In 1H-2017, I had forewarned in my analysis live feeds that based on my ground zero data collection, many naive retail investors had cut loss their Cosco Holdings, suggesting this will be the TRUE ROCK BOTTOM. This coincided with volume flow and BDI turning for maximum reversal.

The first green circle refers to my live forewarning on 6th September 2017 warning again that this region will still be the rock bottom for Cosco (refer to past time-stamped Cosco track records as attached below).

The second green circle refers to my reiterated live forewarning on 9th October 2017 warning that Baltic Dry Index (index measure of worldwide shipping) had bottomed up and will go long term uptrend from here (refer to past time-stamped Baltic Dry Index analyses as attached too).

In the inter-market aspects, this is in sync with movements in Baltic Dry Index (BDI), with Cosco and BDI both triangulating each other and these 2 triangulating further with shipping sectors worldwide. What this further implies is that international trade and finance is picking up strength and momentum. Real growth is being translated into the main streets and the tangible economies of all countries, both emerging markets and developed markets. This is where markets will make another big wave up worldwide. This will not be just for short term or mid term. This strength will be for long term with strong stamina, longer than one can possibly imagine. Based on a bottoms scoop-up basis, Cosco will rally at least +300% and possibly make multi-fold gains of more than +500% from here.

You have what it takes to keep on improving in wisdom, strength and market judgement. Keep it up. Congratulations to those on the right track.

Attached is the technicals for Keppel Corp, the largest oil-rig builder in the world. Keppel Corp is expected to make a retracement to backtest the $6.88-$7.01 region in the short term market's healthy correction. This represents the last golden chance to accumulate or re-accumulate cheaply before the next significant rally comes again. $8.40 will be expected to break up and challenge for $9.60 in the next up-wave resumption. This move will be executed after $6.88-$7.01 has been backtested as resistance-turned-support successfully. Volume flow has been very healthy, indicating that long term outlook for Crude Oil will remain bullish for the rest of 2017 and the whole of 2018.