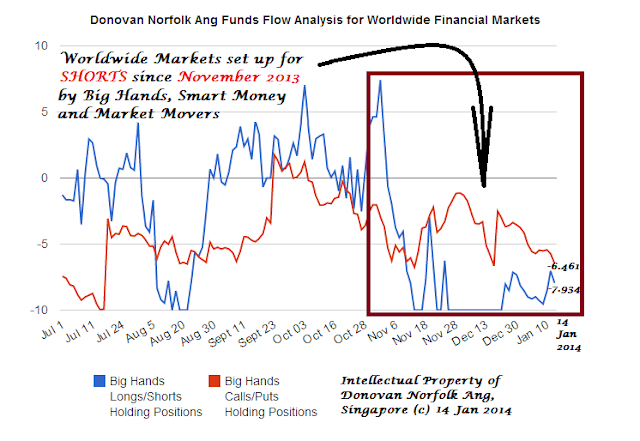 European markets are in the first 60 minutes of trading, while US markets (Dow, S&P500 and NASDAQ) are 5 hours 30 minutes away from opening for trading.

+ Bear in mind that as per warned: November and December of 2013 were used by Smart Money to set up price actions for shorting the financial markets worldwide; this, in turn, lured the herd to buy: were you one such sheep inside the slaughtering herd?
+ As forewarned before it happened too, world markets had used the Dow Jones Industrial Average DJIA for Algo-HFT trigger of sell-downs, i.e. DJIA 16600 points for triggering a world sell-off.
+ This Algo / HFT trigger as per forewarned had been realised with precision 2 weeks ago and the selling is on-going.
+ Worldwide markets are still bearish biased and this sell-down is still far from over.
+ Stocks and equities worldwide are still expected to sell off broadly, unless the particular stock has such strong fundamentals to withstand the broad selling.
+ Hot Money and Smart Money had, also per warned in December, rotated away from Equities, Stocks and Bonds into the Metals Market (Gold, Silver, Copper, etc).