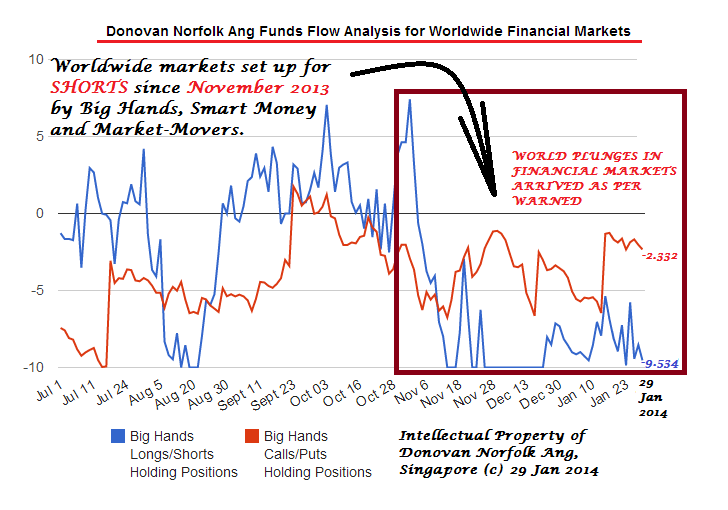 + 20th trading day of 2014:
+ Big Hands piled up yet even more shorts again.
+ Big Hands are still net Shorts in Holdings.
+ Big Hands added bearish puts while piling up more shorts.
+ Dual Shorts by Big Hands today.
+ Today marks the 2nd day of immediate technical dead cat bounce rebound.
+ Big Hands ending the 1-3 days immediate term technical rebound which was fore-warned previously before it happened.
+ Worldwide markets' execution of the 1-3 days' technical rebound within a mid term downwave does not mean a buy as per warned, but rather an opportunity to sell/short/unload/exit on rebound as per warned 2 days ago too.
+ Mid-term selling wave is resuming.
+ Note that the market movers and smart monies have been very persistent in their Shorts Holdings and Bearish Puts Holdings since November and December of 2013 as warned during end of 2013, and it was also warned at the end of 2013 that year 2014 would be welcomed with sharp market plunges worldwide.
+ Be extremely cautious of the stocks and equities markets worldwide.
+ Expect whipsaws and volatility.

+ Markets are still bearish biased in the mid-term with the 1-2 days' technical rebound ending.
+ In essence, sell/unload stocks and equities on rebounds as warned previously, or SHORT on rebounds. Run first, talk later.
+ Any intra-day positive/bullish divergences will not be executed fully as warned too; instead they will be negated with unexpected sell-offs which will resume today.
+ To long is to counter-trend (reward is still there but will have to take the high risk associated with it).

+ In the mid term, the selling in worldwide stocks and equities markets is still far from over.
+ Stocks and equities worldwide are still expected to sell off broadly, unless the particular stock has very strong fundamentals to withstand any broad selling.
+ It took at least 2 months for the rainstorm clouds to accumulate, it follows that significant portfolio damages have to be effected by the selling for the rainstorm clouds to be depleted.
+ Hot Money and Smart Money had, also per warned in December 2013, rotated away from Equities, Stocks and Bonds into the Metals Market (Gold, Silver, Copper, etc).