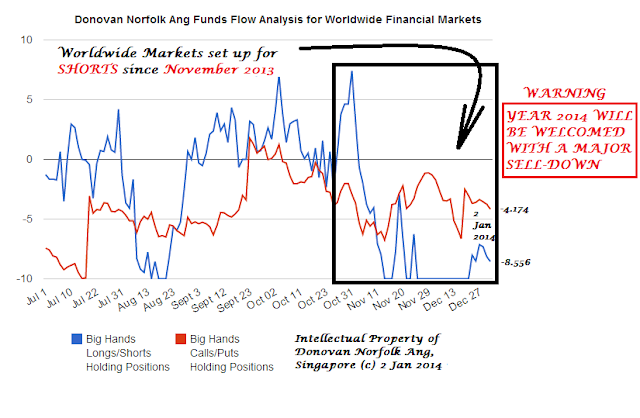 + First trading day of 2014:
+ Markets worldwide welcome 2014 with bad sell-offs as per warned on 31 Dec 2013.
+ Big Hands are dual shorts for a third consecutive day: Bearish.
+ Big Hands increased Shorts today.
+ Big Hands increased Puts today.
+ Big Hands, Smart Money and Market-Movers are very persistently shorts in November and December of 2013: be highly cautious.
+ Big Hands are also persistently bearish Puts in November and December of 2013.
+ Puts remain as speculative and non-protective.
+ World markets had used Dow Jones Industrial Average for algorithmic/high frequency trading trigger of sell-downs as per warned beforehand, i.e. DJIA around 16600 points to trigger the next wave of resumption in down-move.
+ Worldwide markets are still bearish biased.
+ Mid Term Corrections worldwide expected to resume in January 2014 (no change in stand).
+ Shortists should short on any technical rebounds, where rebounds remain merely for selling at good prices.
+ Hot Money and Smart Money had rotated away from Equities-Stocks and Bond Market into the Metals Market.

+ Timeframe of worldwide selling: Tentatively projected to last until February 2014.

+ Financial Markets worldwide are officially entering into critical stage from November 2013 to early 2014 (Tally with all your index charts, they are all at critical multi-year resistances).

+ Note that there was unusual unloading volume in SPDR Morgan Stanley Technology Index ETF (read for implications on NASDAQ and World Markets):
http://donovan-ang.blogspot.sg/2013/12/spdr-morgan-stanley-technology-index.html

Refer to some Technicals charted in the first week of December:

and some Technicals charted in the third week of December:

+ The following are the short-mid term sell-off correction targets as per analysed since 7 weeks ago with some new updates:
(you might like to refer to the accompanying detailed analysis links attached too):