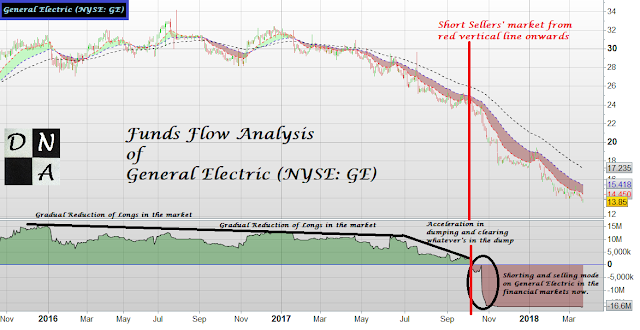 Attached is The Donovan Norfolk Smart Money Funds Flow Analysis (FFA) for General Electric (GE). All FFA illustrations are as per highlighted on the chart. Notice how markets for GE transited from unloading phase (distribution phase) with the series of gradual reduction of longs by smart monies, followed by acceleration in distribution to fools' hands, before eventually switching into a short-sellers' market?

There are still plenty of naive hands trying to catch the falling knife while in the smart money realm, it is a shorting/selling market now for General Electric. One can reasonably expect the GE downtrend to last for quite a long time because the shorting/selling party has just begun for GE. In essence, the funds flow on GE is rather bearish.

Based on extremely high funds outflow, General Electric is now a short-sellers' market, a selling paradise and a must-short to act as a hedge for one's portfolio of longs investments. The funds outflow is impulsive. Based on long term technicals, General Electric can go as low as $6.925 (first half price),  $3.46 (second half price) and $1.73 (third half price with a near -90% loss in value) from here. I will not be surprised if it hits $1.00 per share (more than -90% loss in value).