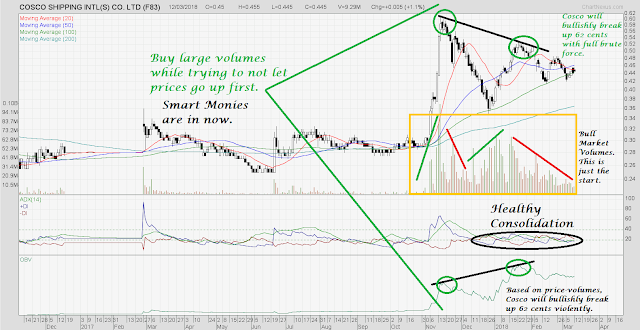 Attached above is the technicals for Cosco that is listed in the Singapore SGX.
There exists (based on technical price-volume) a net of large volumes that have been bought up in the market while trying not to let prices go up first (refer to technical chart 1: price actions coupled with OBV circled regions). This means smart monies are in. This is in sync with the worldwide transition of shipping and shipbuilding industry from winter to spring, a theme which I had forewarned last year. The ADX Advance Decline indicator shows healthy consolidations going on for Cosco. The series of red and green volume lines are bullish volumes. In the Cosco Quarterly Chart 2 below, Cosco is preparing to spike with a large price move any time now.

Side note to prove my points of 2011, 2012, 2013, 2014, 2015, 2016 and 2017 all these years:
As far as I recall, there were quite many retailers who ignored my 2011, 2012, 2013 etc warnings to get out of general broad market stocks in Asia, especially small caps and mid caps including Cosco at above $1.80-$1.90 long time ago, a time when markets were really no-brainerly bullish with all the FED money printing, and I warned they will all lose terribly. I also challenged everyone their logic with my reverse engineered logic back then. I also showed charts on why everyone will be doomed for terrible losses. It all got enacted. Many people lost badly. For instance, for Cosco, many investors and retailer longs cut their massive losses just 3Q-4Q of last year at 30 cents plus area, a time when I entered and they exited. And I personally know quite a number of them -- those who exited while I entered, still as reliable as always by being in the opposite side of me.

As a reflection again to prove my points made in 2011, 2012, and 2013 etc, for every day, every week, every month and every year during those period, I was highly bearish, and I warned before that the day when all retailers of Cosco longs (as well as many other stocks) cut losses with CONVICTION fear of crash, it will be the day I will scoop the bottom with CONVICTION of super rally, only at the right time. And, scoop the bottoms yes I did, accompanied with all the analyses of bottom scoops -- AT PRECISION POINT.

This is called Acme of Professionalism,  and doing so without being selfish nor with any tinge of agenda.