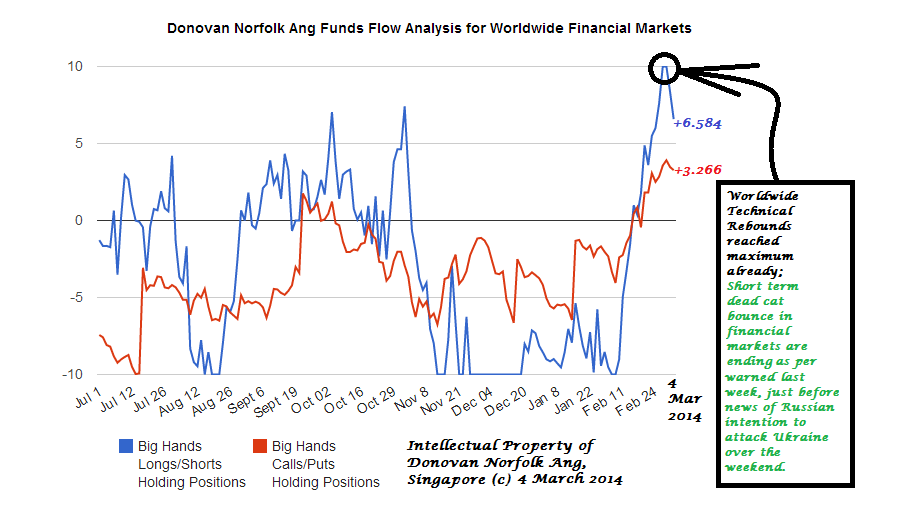 + 4th of March of 2014:
+ Big Hands are dual sells/shorts today despite market attempts to do an immediate term rebound: Bearish (Shorting/Selling even on immediate term intradays' rebound)
+ Big Hands and Smart Money had reached bearish reversal point per analysed last week based on funds flow analysis, i.e. the short term technical rebounds at tipping point last week.
+ Financial Markets worldwide are generally in the following structures:
+ Immediate term: Rebound
+ Short term: Bearish Reversal
+ Mid term: Transition to or in the midst of downtrend
+ Long Term: Transition to Nascent Bear Market
+ Big Hands are still loaded with Calls.
+ This suggests that the short term technical rebounds were merely speculative ones.
+ The short term technical rebound in February of 2014 are dead cat bounces within mid term and long term downtrends that had been taking shape over the past 1 year.
+ At FFA of +10.000, the technical rebounds worldwide had been confirming the birth of a new bear market
+ Markets are getting volatile again as per warned last Friday based on cards counting of the Big Hands and Smart Money positions, a calculation that was derived just before Russia announced possible intentions to attack Ukraine over the weekend.
+ Now that shorts had been squeezed, the financial markets worldwide are going to demolish the longs, buys and investment portfolios now.
+ If one is still holding investment portfolios, longs or buys in stocks and equities market, one is expected to suffer further portfolio damages again, a warning that was issued by Donovan Norfolk Ang since November-December of 2013, based on totality analysis of the financial markets. Nascent long term bear market is coming sooner than you expected.
+ Last week was the calm before the storm as per also warned.


Read all the hot money, smart money and capital exodus / capital flight articles located at the right hand column of this analysis site. They were extremely in-depth and painstakingly written to help you. I had put in much efforts in those quality analysis articles and giving to you for free.