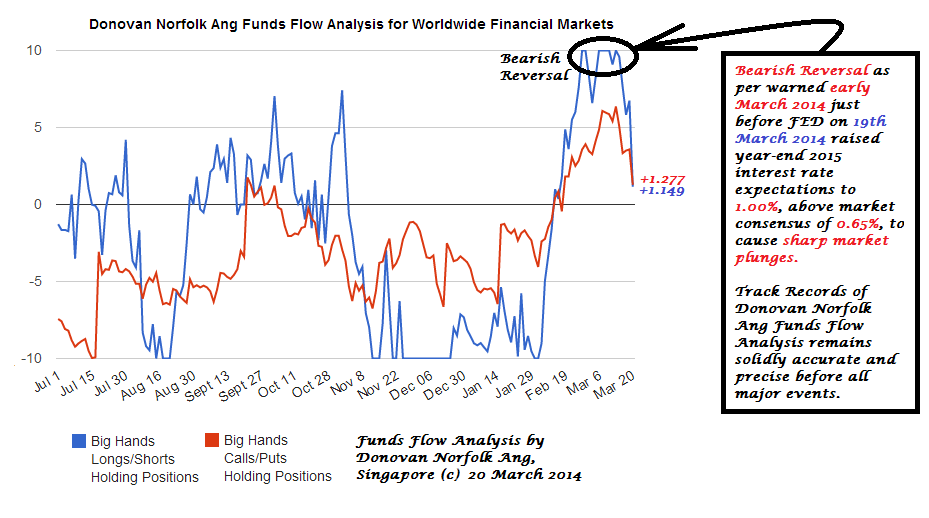 European markets are in the first 3 hours 45 minutes of trading, while US markets (Dow, S&P500 and NASDAQ) are 1 hour 45 minutes away from opening for trading.

+ 20th of March of 2014:
+ Worldwide Big Hands are heavy dumping with furious sell/shorts today.
+ The Fed has raised year-end 2015 rate expectations to 1%, above market consensus of 0.65%.
+ The markets did not execute the predicted 1 day immediate term fake rally (to pretend to interpret raise in interest rates as healthy economy moving forward), but instead chose to execute an immediate term sell-off within the bearish reversal as per warned since early March 2014 (markets chose to interpret the raise in interest rates as putting nasty brakes on the worldwide economies).
+ This illustrates the high bearishness since the short term bearish reversal warned in early March before this sell-off resumption.
+ This bearish reversal point is now a first initial confirmation of transition to bear markets worldwide.

+ The short term technical rebounds of February 2014 are merely speculative dead cat bounces as warned beforehand.
+ At FFA of +10.000, the short term technical rebounds worldwide are confirming the birth of a new bear market, and these technical rebounds were meant to serve as noises to confuse the markets.
+ Now that after the shorts had been squeezed in February 2014, the financial markets worldwide are going to resume hammering the longs, buys and investment portfolios for the long term.
+ If one is generally still holding investment portfolios, longs or buys in stocks and equities markets, one is expected to suffer further portfolio damages again, a warning that was issued by Donovan Norfolk Ang since November-December of 2013 based on totality analysis of the financial markets. Nascent long term bear market is coming sooner than you expected and any immediate term rebounds are good opportunities to exit.