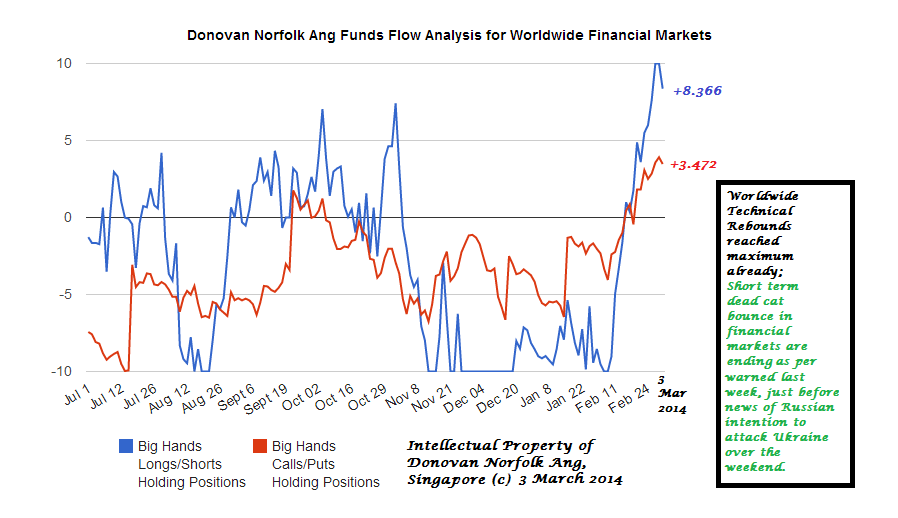 European markets are in the midst of the first 1 hour 40 minutes of trading, while US markets (Dow, S&P500 and NASDAQ) are 4 hours 50 minutes away from opening for trading.

+ 3rd of March of 2014:
+ Big Hands and Smart Money had reached bearish reversal point per analysed last week based on funds flow analysis, i.e. the short term technical rebounds at tipping point last week.
+ Financial Markets worldwide are generally in the following structures:
+ Short term: Bearish Reversal
+ Mid term: Transition to or in the midst of downtrend
+ Long Term: Transition to Nascent Bear Market
+ Big Hands are still loaded with Calls.
+ This suggests that the short term technical rebounds were merely speculative ones.
+ The short term technical rebound of February 2014 are dead cat bounces within mid term and long term downtrends that had been taking shape over the past 1 year.
+ At FFA of +10.000, the technical rebounds worldwide had been confirming the birth of a new bear market
+ Markets are getting volatile again as per warned last Friday based on cards counting of the Big Hands and Smart Money positions, a calculation that was derived just before Russia announces possible intentions to attack Ukraine over the weekend.
+ Now that shorts had been squeezed, the financial markets worldwide are going to demolish the longs, buys and investment portfolios now.
+ If one is still holding investment portfolios, longs or buys in stocks and equities market, one is expected to suffer further ugly damages again, a warning that was issued by Donovan Norfolk Ang since November-December of 2013 based on totality analysis of the financial markets. Nascent long term bear market is coming sooner than you expected.
+ Last week was the calm before the storm as per also warned beforehand. More rounds of nasty worldwide sell-off is coming again. Short term dead cat bounce that had been executed for you to escape is ending. FEAR is coming soon again.


Read all the hot money, smart money and capital exodus / capital flight articles located at the right hand column of this analysis site. They were extremely in-depth and painstakingly written to help you. I had put in much efforts in those quality analysis articles and giving to you for free.