This entire analysis highlights once again that financial markets worldwide are bearish with Philippines, Thailand, Indonesia, and the likes of Emerging Markets particularly at high risk and high jeopardy. Refer to all previous analyses on the great capital exodus/flight away from Financial Markets and, in particular, the Emerging Markets.

+ This is a Philippines heavy-weight index stock.
+ It is a telco company that is much like the Singtel of Singapore.
+ Defensive stock is cracking now.
+ When heavy-weight defensive stocks have broken down, it is an ill omen for the country's stocks and equities market.
+  Big Hands, Smart Monies and Market Movers are no longer interested in any dividend collections (be fearful).
+ When the safest, largest and most heavy weight Mother-ship turns, so will almost all stocks in the Noah's Ark.
+ Major up-trend line has broken down.
+ Huge volumes dumped down as a signal of attack-down intention in Oct and Nov 2013 (refer chart above).
+ Cup and Handle break up lured greed and optimism in Philippines in 2013 for the Philippines Institutions, Brokerages, Investment Funds and Public to buy; Big Hands and Smart Monies got out while Fools' Monies got in.
+ To make it convincing for public to buy, rosy forecasts were splashed all over Philippines. Really rosy indeed as news and forecasts in 2013.
+ Entire 2013 was used to distribute TEL as well as all Philippines Stocks and Emerging Market Stocks under the backdrop of rosy forecasts and a better tomorrow.
+ People like to buy on rosy forecasts, hence easy to distribute during this almost 1 year in 2013.
+ Upwave has ended in November and December of 2013, a period which coincides with my everyday warning in Nov-Dec of 2013 that world markets have switched to selling mode at the peak already.

Now, the following is the stock of Philippines Long Distance Telephone Co listed in the US New York Stocks Exchange (NYSE: PHI): 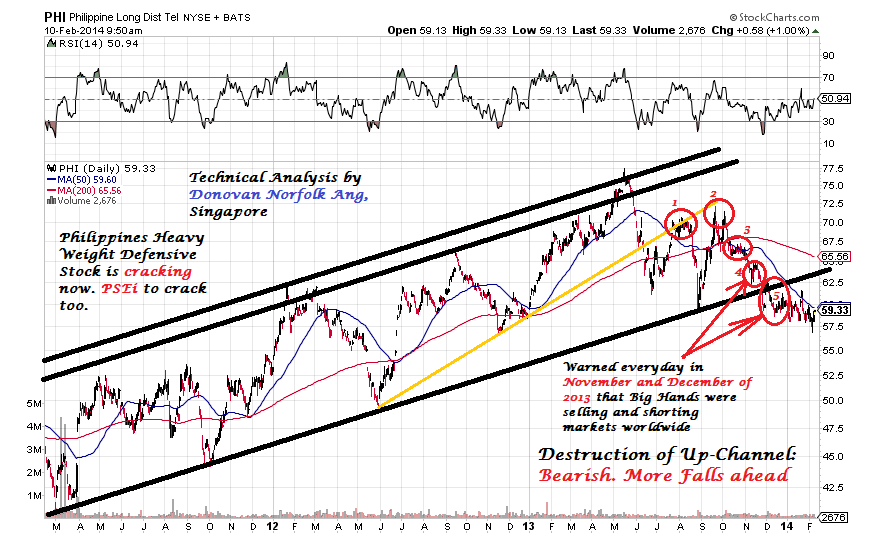 + Together with SM Investments Corp and SM Prime Holdings, Philippines Long Distance Telephone Co will plunge the PSEi using their heavy weight to new 2014 lows and with first wave of margin calls set to be triggered in Philippines. Margin calls have not been seen since 2008 and will further depress the market.

If you're not getting out for safety, are you prepared
for the high downside with substantial loss for those with buys/longs/investment portfolio?
(Expect to see first real wave of Margin Calls worldwide that had not been seen since 2008 financial crisis)
Philippines Stocks, Equities and Financial Markets in tentative nascent bear market at the peak