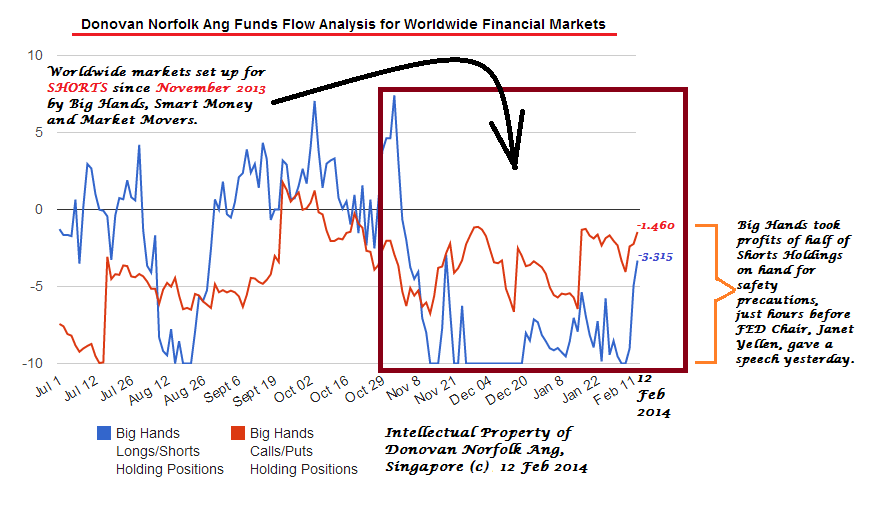 European markets are are in the first 15 minutes of trading, while US markets (Dow, S&P500 and NASDAQ) are 6 hours 15 minutes away from opening for trading.

+ 12th of February of 2014:
+ Big Hands are dual longs/buys for today.
+ Big Hands took profits of slight shorts holdings today for a second consecutive day with risk management purposes.
+ Big Hands still maintained shorts which are accumulated since November-December of 2013 as calculated.
+ Big Hands took profits of some bearish puts today too.
+ Note that Bearish Puts of the Big Hands were persistent since November-December of 2013 and were classified as Speculative ones.
+ Worldwide markets' execution of the immediate term technical rebound within a mid term downwave, as per warned previously, does not mean a buy, but were rather opportunities to sell/short/unload/exit on rebounds.
+ This immediate term rebound is ending soon, and should preferably end today.
+ Financial markets should still be looked upon as bearish-biased.
+ In essence, Big Hands are using immediate term technical rebounds to suck in naive Buying/Longs/Investment monies worldwide and wipe out weak shorts while they consolidate their Shorts.
+ Mid-term selling wave is still in progress: MORE SELL-DOWNS TO GO and is far from over.
+ Reiterate again that the market-movers and smart monies have been very persistent in their Shorts Holdings and Bearish Puts Holdings since November and December of 2013, and it was also warned at the end of 2013 that year 2014 would be welcomed with sharp market plunges worldwide. This worldwide sell-off is far from over.
+ Be extremely cautious of the stocks and equities markets worldwide.
+ Expect whipsaws and volatility.