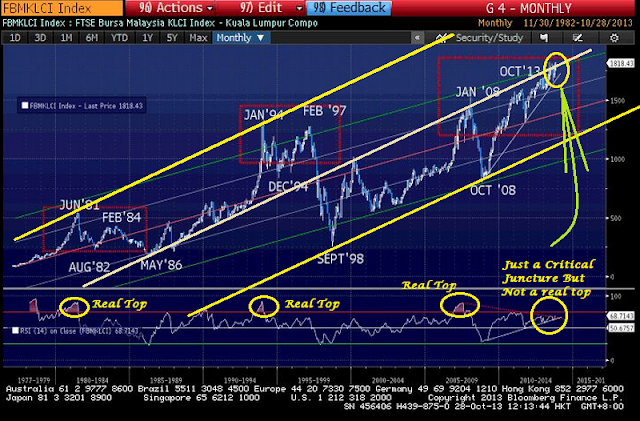 Based on the Technical Structure, Malaysia as well as the whole of ASEAN, will be on a "Golden Era of Expansion", on track for an era of unprecedented development. The Super Cycle Channel (YELLOW CHANNEL) has been formed by the peak of June 1981, bottom of 1986-1987, peak of January 1994, bottom of September 1998, peak of 2007-2008 and bottom of October 2008. The movement is steep, denoting that the rate of development in Malaysia, as well as of ASEAN, is rapid and significant.

Economically, the economic pact of ASEAN (Association of South-East Asian Nations) will make a significant impact to the Asian economy as well as help in the world economy. This means that Laos, Cambodia, Vietnam, Myanmar, Thailand, Malaysia, Singapore, Philippines, Brunei and Indonesia will carry on to outperform provided political stability carries on. Equities Market and Property Market of these economies will outperform significantly during this golden era.

Currently the KLCI is at a critical resistance indicated by the YELLOW CIRCLE at the Middle Channel (refer to above chart). As the YELLOW CIRCLE area is not grossly overbought, in the coming few years KLCI potentially has more upside. The upside in Malaysian financial markets will be spectacular and unbelievable.

What the KLCI needs to do now is to break up the Middle Channel BEIGE LINE as a resistance, rally up convincingly, undergo a heavy correction back to the BEIGE LINE as a nasty shake-out, and make this BEIGE LINE as a support within the next 5-10 years.

This step of conquering the BEIGE LINE is expected to be successful based on the successful backtest of 2007-2008 peak as a support of the operation. Current structure is supporting the operation and implies that Malaysian economy has the fundamentals for more growth, development and progress, although many Malaysians may feel a sense of disagreement. Markets climb over all walls of worries, and if more market participants disagree, the more it will happen.

As current financial market standing of Malaysia is not grossly overbought, and there is no sign of a peak as indicated in the chart above (refer to ALL YELLOW CIRCLES), then contrary to popular belief in Malaysia that their markets are peakish, Malaysia will flex up an even more powerful rally to everyone's disbelief. This is what is supposed to happen: the least one expects it, the better it is for the markets.

Based on the overall Technical Structure above, the Super Cycle Secular Upmove since the 1970s is extremely healthy and as of current standing still not speculative yet. If it rises exponentially, it will mark the end of the cyclical upmove for the cyclical correction within the secular uptrend. Properties in South East Asia and Malaysia are still expected to continually rise within the next few years and within the next 1-2 decades, though not one straight line up, based on projection of current structure. There is still no Greed yet.

One must be blind to be missing out a Golden Era of ASEAN (South-East Asia) Secular Growth.
One can ride this growth long term with investments in ASEAN Stocks, Indices and Properties. If such are not readily available to you, then the last alternative may perhaps be ASEAN ETFs listed in US Markets:

Note 1:
The above are investment ideas. No exact entry has been analysed for the above as it is an investment idea for riding the ASEAN Development big wave up, and these are for longer term investment purposes. There could also be some slight time decay on ETF value as ETFs may sometimes have slight management fees taken away from the prices. The main point of the analysis is to give an economic over-view of Malaysia as well as a glimpse into ASEAN.

Note 2:
This may mean ASEAN currencies will be expected to remain in strong uptrend, contrary to popular beliefs. Expect continual strength in Malaysian Ringgit, Thai Baht, Vietnamese Dong, Filipino Peso, Indonesian Rupiah and Singapore Dollar in the coming many years.

Email ThisBlogThis!Share to TwitterShare to FacebookShare to Pinterest
Labels: KLCI