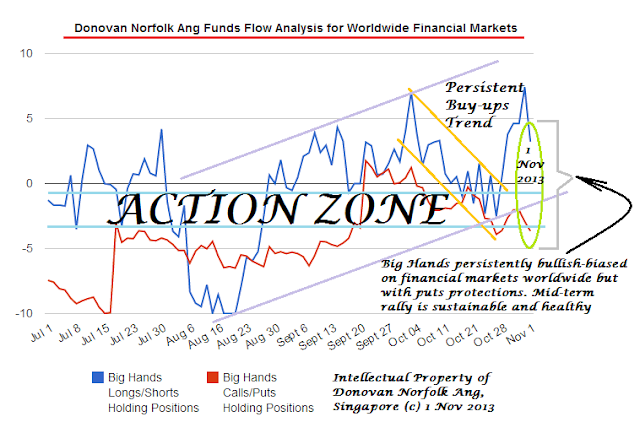 European markets are in the first 20 minutes of trading, while US markets (Dow, S&P500 and NASDAQ) are 6 hours 10 minutes away from the opening bell.

+ Big Hands were large dual-longs since 3 days ago.
+ For today, Big Hands are dual sells: Reduce some Longs and increase in Puts.
+ Smart Money used immediate term correction to spike up Puts Holdings' prices while concurrently Longs in the financial markets.
+ This simultaneous action creates noise/confusion and facilitates for re-accumulations while profiting from puts.
+ Big Hands are not shorting the markets despite consolidations, they are merely holding puts as short term downside-selling protections.
+ For today, Big Hands are consolidating their longs while increasing puts as protections.
+ Market-Movers are cautiously bullish-biased in outlook for the mid-term.

+ Overall Funds Actions Structure:  November-December Rally is expected, with Mid-Term large upwave since September still in the midst of execution; all Short-Term corrections are occurring within a very strong Mid-Term Upwave Rally, so if one is shorting, it is considered a Mid-Term Counter-FFA trade. Counter-FFA have high risks when one is wrong.
+ Any immediate-term corrections are to be taken as subsets of healthy and larger mid-term upwave movements, as per reiterated during end-August/early-September warning of a large wave relief rally when everyone were selling on US Government Shutdown while Big Hands bought up cheaply.

+ Posture: BULLISH-BIASED mid-term wave to last till Christmas in current estimation.
+ Investors/Bulls could re-accumulate buys on dips for the larger mid-term rallies per reiterated since eng-August and early-September.

+ As the Puts keep on increasing, short-term corrections within the larger mid-term updrives could be in place now. The following are the short term correction targets as per reiterated previously:

+ However, note that the short-term corrections are expected to be shallow and are to be taken as healthy ones. Shorting can still be profitable but reward-risk ratio may not be good compared to buying-on-dip.

+ And the ULTIMATE BIG TARGET: Stocks Worldwide and across the international boards to rally on every overbought and on top of public disbelief.

+ Emerging Markets, ASEAN markets, Asia Markets and Peripheral European Markets are expected to outperform: Risk-on Rallies worldwide still expected together with Gold, Silver and Commodities, and will continue up-move until I turn reversal.