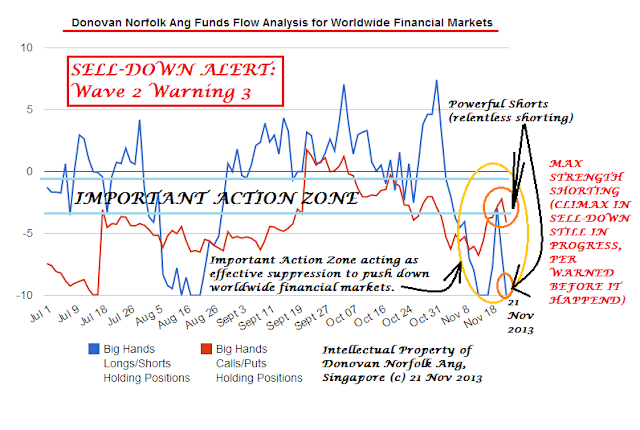 European markets are in the first hour of trading, while US markets (Dow, S&P500 and NASDAQ) are 5 hours 30 minutes away from the opening bell.

+ As per warned before it happened, Markets sold off sharply yesterday in Spain, Europe and Asia for a second consecutive trading day; markets also sold off in US yesterday as per warned 2 hours 40 minutes before the NYSE/OMX (DJIA, S&P500 and NASDAQ) opened for trading.
+ As per warned too for the past few days, financial markets in India, Philippines, Hong Kong, Singapore, Malaysia, Spain, Italy, France etc (in essence Asia and Europe) had resumed short-mid term sell-down which was reiterated that the selling has not ended yet.
+ Big Hands have for a second attempt piled up Shorts to the Maximum now.
+ Big Hands' puts have also piled up all over again
+ Big Hands/Smart Money worldwide are still shorts-biased.
+ Short-mid term outlook: Big Hands worldwide are still executing short-mid term sell-offs worldwide.
+ Timeframe of correction intention will now be changed from short-term correctional sell-off to short-mid term correctional sell-off.
+ Backtesting of the DNA-FFA Action Zone (refer above chart) was conducted by the Big Hands for Bearish Confirmation per warned 2 days ago.
+ Big Hands have not only held on to their shorts, but piled up wave after wave of massive shorts.
+ Big Hands' puts are still speculative in nature and not for protections.
+ Short Term Corrections worldwide have not ended as per reiterated many times previously. This is despite any immediate term rebounds which was to confuse market participants worldwide and to trigger weak holders' stops (refer previous special write-ups).
+ Dow Jones Industrial Avg Index, S&P500 Index and NASDAQ Composite Index will continue to sell off when it opens in 5 hours 31 minutes time.
+ Forex markets had also reacted again per my analyses: USDJPY, EURUSD, GBPUSD, Swiss France, Canadian Dollar, AUDUSD,NZDUSD to resume correction down again.
+ Last wave of short term selling climax is still to be expected. Note that if the attempted -10.000 maximum shorts cannot bring about a sell-down climax, the long term outlook for world international financial markets will reverse into a long term bull market.
+ Any immediate rebound is still a short, until the short-mid term correction ends.
+ International Financial Markets worldwide are officially entering into critical stage from 20 Nov 2013 till end of 2013.
+ Some protections and cautions are still warranted if one is late longs in Stocks, Equities, Indices, Commodities, Forex: EURUSD, GBPUSD, AUDUSD, NZDUSD, CANADIAN DOLLAR CAD, SWISS FRANC CHF AND JAPANESE YEN JPY, Gold, Silver, Crude Palm Oil and Crude Oil.

Posture:
+ Market-Movers are still looking to execute short term sell-down on indices, index stocks, big cap stocks and mid cap stocks worldwide as per reiterated 2 weeks ago (Note: penny stocks and small caps do not need to respond to index/big market corrections).
+ Short-term Corrections are expected to be executed with more impulse; however, do bear in mind that mid-term worldwide market outlook is still upwave-biased despite this anticipated short term sell-down with potential force.

+ The following are the UPDATED short term sell-down correction targets as per reiterated since 2 weeks ago: