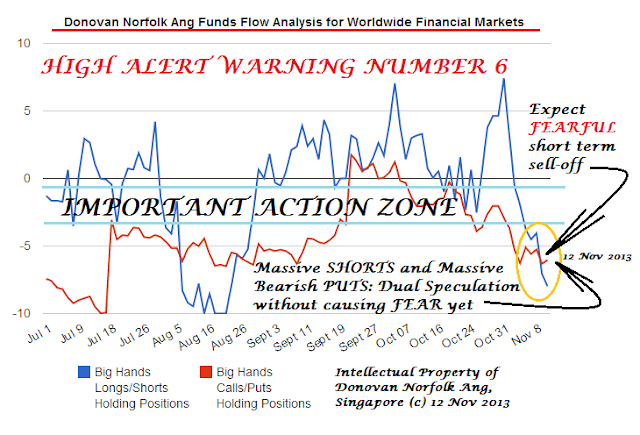 European markets are in the first 2 hour 25 minutes of trading, while US markets (Dow, S&P500 and NASDAQ) are 4 hours 05 minutes away from the opening bell.

+ The sell-off came as per warned during the past 5 warnings and this is Warning Number 6.
+ This immediate term 1-2 day rebound has ended per warned yesterday and had resumed to the short term sell-off also as per warned.
+ The continued short term sell-down came per expected 5 days ago despite any good news such as ECB cutting of rates.
+ In fact, the good news will cause the sell off as per warned previously in my Facebook Wall as well as Facebook Page too.
+ Big Hands carried on their stunner yet again: yet another consecutive round of further piling up of Shorts today.
+ Big Hands maintained majority of their PUTS holdings (their puts are largely in the money with profits).
+ Big Hands' PUTS of the last 1-2 weeks have spiked up significantly in prices (lucrative profits now).
+ Big Hands were very confidently dual sells yesterday per warned, making use of any bullish immediate term rebound to short and to add puts.
+ Big Hands persisted their SELLS today.
+ Big Hands' Short-Term Holdings are now shorts with SIGNIFICANT strength.
+ Big Hands' PUTS Holdings are now Shorts with SIGNIFICANT strength too.
+ Majority of Big Hands' Shorts and Bearish PUTS are still held in place and are green in the money now.
+ Immediate term rebound had ended for resumption of short term SELL DOWN as per reiterated yesterday just before the resumption in sell-down is executed today.
+ This short term correction can be a brunt and is expected to be strong a sell-off.
+ Some protections and cautions are warranted if one is late longs in Stocks, Equities, Indices, Commodities, Forex: EURUSD, GBPUSD, AUDUSD, NZDUSD, CANADIAN DOLLAR CAD, SWISS FRANC CHF AND JAPANESE YEN JPY, Gold, Silver, Crude Palm Oil and Crude Oil.

Posture:
+ Big Hands' persistence in Puts (refer to chart above) coupled with switch to shorts last week are signs of intentions: Short-Term Correction still brewing VERY strong.
+ Big Hands Shorts and Puts are getting not only STRONG but STICKY and PERSISTENT.
+ Market-Movers are still looking to execute short term sell-down on indices, index stocks, big cap stocks and mid cap stocks worldwide as per reiterated last week (Note: penny stocks and small caps do not need to respond to index/big market corrections).
+ Short-term Corrections are expected to be executed with more impulse; however, do bear in mind that mid-term worldwide market outlook is still upwave-biased despite this anticipated short term sell-down with potential force.

"Markets will ignore anything good, be it on the news side, fundamental side or technical side, as long as Big Hands are Shorts with Puts."
(ECB cutting of rates ---> Bullish ---> Sell-down)