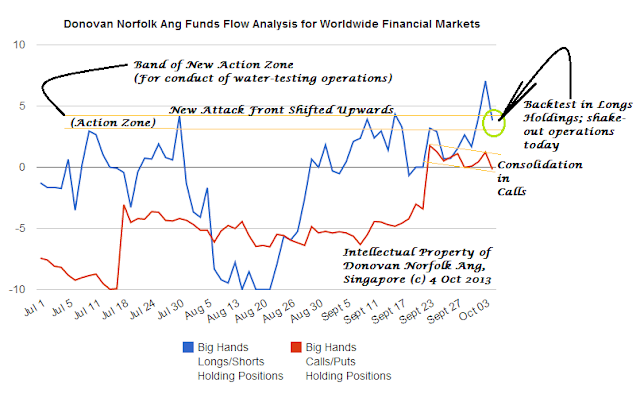 + Majority of market participants had shorted on US Government Shutdown as well as the series of bad events lining up.
+ Per highlighted previously, 4 days ago, it was a day of retailer longs trampling on retailer longs cheaply (i.e. small fishes selling and trying to get out on panic), while the Big Hands successfully shook these weak holders out to buy strongly from them, in turn also luring shorts to short wrongly.
+ For today, Big Hands are dual sells, unloading some longs holdings and unloading all Calls on hand.
+ Big Hands are consolidating their Longs and executing shake-out operations.
+ Big Hands are also testing the market waters at the same time.
+ Markets are still bullish-biased and a powerful rally is still expected within the next 48 trading hours.
+ Per warned everyday the past week, smoke screen had been created to lure shortists to short the markets, and to throw confusion to buyers and market participants who are longs or who are investors.
+ Per analysed 2 weeks ago, Big Hands' consolidations were expected to end last week, just before the US Government Shutdown.
+ Per analysed and reiterated, the US Government Shutdown would spearhead a super rally on bad news.
+ Per maintained, worldwide market rallies still expected to continue for mid term.
+ Previously the worldwide rallies were judged by me to be merely short-term and for shorting purposes based on DNA-FFA interpretation; however, the worldwide rallies have, since last week, changed in nature to one which is aiming for large-wave mid term up-move, essentially one which has some more upside and for fiercer pump-up.
+ Per maintained, the persistent immediate term shallow consolidation of the past few trading days will make this large up-wave dead cat bounce a longer lasting and larger magnitude one.
+ Worldwide International Financial Markets are still inherently Bullish-Biased, especially Asia and Europe.

+ Financial Markets, Commodities Markets, Gold, Silver and Forex markets (AUD, EUR, CAD, GBP, NZD, CHF etc) are still expected to have some more upside against USD, and this upside is expected to be healthy per maintained.

+ And the ULTIMATE BIG TARGET: Stocks Worldwide and across the international boards to rally on every overbought and on top of public disbelief.

Summary as below:
* Rally expected in Crude Palm Oil, Crude Palm Oil stocks, Commodities, Gold, Silver.
* Corn will rebound to the targets for shorting as per mentioned previously: http://donovan-ang.blogspot.sg/search/label/Corn
* Strength still expected in AUDUSD.
* Strength still expected in EURUSD.
* USDJPY expected to be bearish.
* Technical Rebounds expected in weak currencies such as Ringgit, Rupiah, SGD, Philippines Peso, Indian Rupee, Korean Won, HKD, Thai Baht, Russian Ruble, Middle-East currencies and currencies that were hammered in August 2013.
* Canadian Dollar, Brazilian Real and Australian Dollar make good buy-on-dips.
* World Markets to continue pushing up for Technical Rebounds when everyone is shorting and judging that we are at peak currently.

+ All major indices worldwide will continue to rally until I turn bearish.
+ This super rally will burn all LATE SHORTS out there who to tried to beat the markets in judging that markets were toppish, peakish or bearish on a series of bad news line-ups (War, Government Shut-down, Poor economic data, Debt Ceiling Failure).