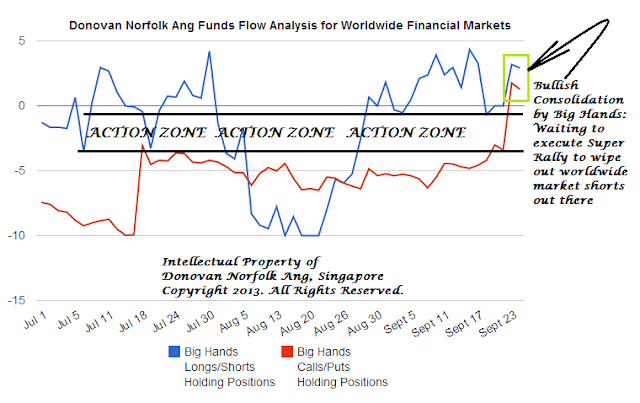 + Big Hands consolidating their longs today.
+ Big Hands holding their longs despite letting the markets retrace down today.
+ Smoke screen was created to lure bears to short the market and to throw confusion to buyers and market participants who are longs.
+ Per analysed last week, Big Hands' consolidations are expected to end this week.
+ Rally is still expected to continue.
+ Since yesterday, Big Hands are not only re-longs again, they have unloaded all their Puts in net and converted to Calls.
+ Per warned last week, this next wave of rally is to resume after current few days of consolidations in financial markets worldwide.
+ Previously the worldwide rallies were expected to be for short-term and for shorting purposes based on DNA-FFA interpretation; however, the worldwide rallies have changed in nature to one which is going to be of healthy large-wave dead cat bounces for mid term, essentially one which has some more upside and for fierce pump-up.
+ Worldwide International Financial Markets are still Bullish-Biased (Especially Europe).

+ Financial Markets, Commodities Markets, Gold, Silver and Forex markets (AUD, EUR, CAD, GBP, NZD, CHF etc) still expected to have some more upside against USD, and this upside is expected to be healthy.

Summary as below:
* Rally expected in Crude Palm Oil, Crude Palm Oil stocks, Commodities, Gold, Silver.
* Corn will rebound to the targets for shorting as per mentioned previously: http://donovan-ang.blogspot.sg/search/label/Corn
* Strength still expected in AUDUSD.
* Strength still expected in EURUSD.
* USDJPY expected to be bearish.
* Technical Rebounds expected in weak currencies such as Ringgit, Rupiah, SGD, Philippines Peso, Indian Rupee, Korean Won, HKD, Thai Baht, Russian Ruble, Middle-East currencies and currencies that were hammered in August 2013.
* World Markets to continue pushing up for Technical Rebounds when everyone is shorting and judging that we are at peak currently.