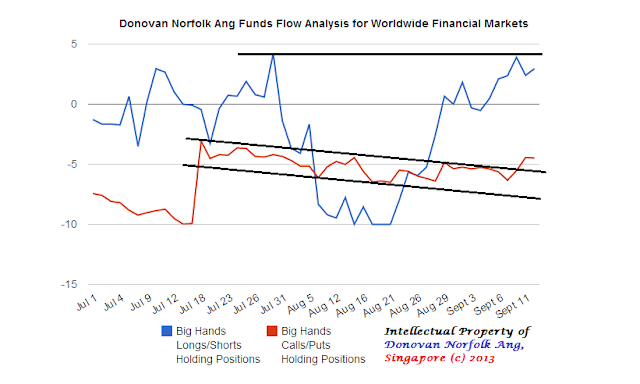 + The rally of this week had been expected and was warned since last week.
+ Big Hands have slightly increased their longs holdings today.
+ Big Hands have slightly increased their puts holdings today.
+ Big Hands still consolidating longs and puts holdings, still attempting to make this overall switch to longs a progressively healthy one.
+ Markets Worldwide still bullish-biased short-mid term.
+ Load longs on dip slowly for the technical rebounds worldwide.
+ Based on DNA-FFA Tabulation above, Big Hands Puts on hand have achieved bullish breakthrough yesterday and is still above the bullish breakthrough point.
+ Based on DNA-FFA Tabulation above, Big Hands Overall Longs are still aiming for breakthrough as illustrated on tabulations above.
+ The 48 hours timeline anticipated by me has just expired with a powerful rally overnight in US.
+ More worldwide technical rebound rallies in the short-mid term still expected.

+ Many international markets will be testing bear-bull boundaries after this short-mid term rebounds worldwide.
+ Weak markets (e.g. Philippines, India, Korea etc) are already entering into Bear Market Zones at high points.
+ Strong markets (e.g. US, Singapore, Germany, etc) had held on to critical supports temporarily and will attempt to bounce off these critical supports; these critical supports will get tested repeatedly (their critical supports are being tested currently).
+ US markets (DJIA, S&P500 and NASDAQ) will go on to make all time new highs while all other markets are in precarious modes.
+ Rebounds of emerging economies will merely be dead cat bounces.


In essence, there will be 3 groups of BIG MARKET MOVEMENTS from now:


US Markets of S&P500, DJIA and NASDAQ, as well as Malaysian KLCI
These markets may hover at all time new highs and throw a big array of confusions to traders, investors and analysts. While US hover around all time new highs, weak markets' rebounds will confirm bear market and mid-strength markets may transit to bear market phase in this rebound.
Ride and observe and be cautious.