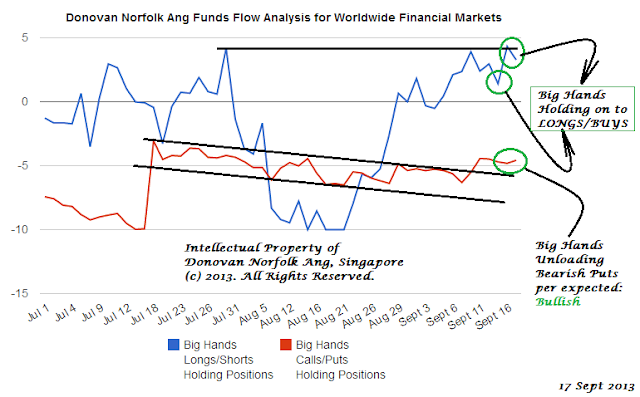 European markets are in the 2nd hour of trading, while US markets (Dow, S&P500 and NASDAQ) are 4 hours 31 minutes away from opening.

+ Big Hands holding on to majority of longs and not doing profit takings of their previous buys.
+ Big Hands reducing bearish puts gradually.
+ Overall for today: Big Hands consolidating their Longs/Buys and slowly reducing their puts holdings, still attempting to make this overall switch to longs a progressively healthy one.
+ Note that this switch to longs is becoming healthier and healthier which may make this dead cat bounce rally become a mid-term of at least 1 month and possibly up to 3 months.
+ Markets in consolidation mode, and still bullish-biased.
+ Expect any immediate term and short-term sellings to be shallow, and expect any dead cat bounce technical rebound rally to be powerful.
+ Current State: Markets still bullish-biased, as per warned since 31 August 2013, in which Big Hands are on the longs/buying side, with some protections against downside which is gradually reducing now.
+ Big Hands still expecting breakthrough rallies as per warned for the past 2 weeks.
+ Markets are still out to kill, burn, cripple, crumble and wipe out huge amount of retailer/small fishes' shorts out there who had shorted on FED Tapering and Syrian War.


Additional Analysis from Donovan Norfolk Ang as posted on my Facebook Wall:


This first batch of tapering had been priced in 6-9 months ago.


Tapering news release will merely be something expected and just result in immediate-term shallow fake-selling, only to be followed by short-mid term real buying on relief; this is something like breathing a huge sigh of relief, and this rally is initially because 1st batch of tapering had been overly priced-in previously (by going overly-down in the previously warned sell-downs).


Any push-ups in international financial markets worldwide is merely a reversion to the mean. From the mean, markets can even further rally to provide an irrationality for shorting opportunities.


MANY PEOPLE ARE STILL THINKING THAT CURRENT REBOUND HAS REACHED THE PEAK OR IS TOPPISH ALREADY, AND THEY ARE SHORTING, SELLING AND SAYING THAT PEAK/TOP HAS ALREADY HIT FOR THIS REBOUND.

WHAT HAPPENS THEN? THERE WILL BE MORE RALLY TO GO. LATE FINANCIAL MARKET SHORTISTS ARE STILL THINKING THAT THEY STILL HAVE HOPE, AND LIVING ON HOPIUM. HENCE MARKETS WILL KILL THEM ALL WITH MORE UNBELIEVABLE RALLIES.