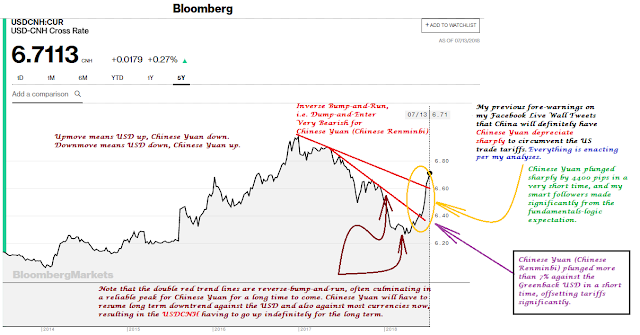 Attached is the Technicals for USDCNH (USD against offshore Chinese Yuan).

The 2 red lines represent an Inverse (Reverse) Bump-and-Run which is essentially similar in nature to Dump-for-Entry. This is very bearish for the Chinese currency. The movement tallies with my earlier fore-warnings on my Facebook Wall Tweets that China will definitely have Chinese Yuan depreciate sharply to circumvent the US Trade Tariffs. Everything is enacting to my early analyses -- the Chinese Yuan plunged a sharp 4400 pips in a short time (around -7.00%) against the greenback and my smart followers made significant profits from the earlier fundamentals-logic deductions.

In the price structure above, note that an inverse bump-and-run means that the Chinese Yuan had already peaked (USDCNH bottomed) and is resuming a very long term downtrend, i.e. USDCNH will go up indefinitely in the current economic cycle. As even the USD itself is expected to peak too in its current dead cat bounce, this means that Chinese Yuan will be some of the weakest currencies of all currencies in the world (except of course the Venezuela Bolivar). From "trade war" which may fizzle out, the next bout may be currency war (the race to the bottom) between the world's number 1 economy and the world's number 2 economy.

Email ThisBlogThis!Share to TwitterShare to FacebookShare to Pinterest
Labels: USDCNH