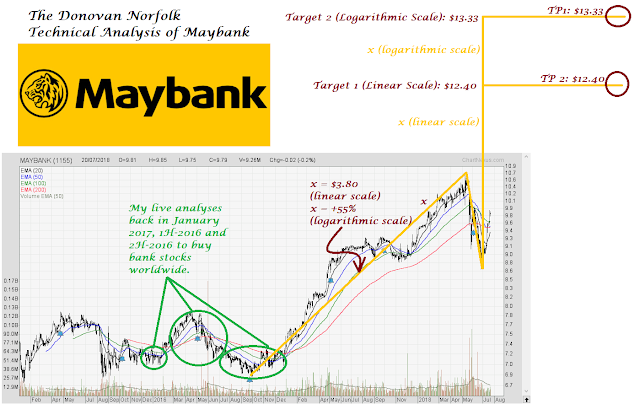 Attached is the updated Technicals for MAYBANK -- The Donovan Norfolk Rated Top Bank of Entire Malaysia KLSE. The 3 dark green circled regions are my live calls in January 2016, 1H-2016 and 2H-2016 to buy bank stocks all over the world. Back in 2016, the herd were shouting for market crash and a bear market because the FED rate hikes caused a massive fear and markets were selling off. Singapore was to have technical recession back in 2016 too, and I was calling for bank stocks' buys.

Most of the followers are now sitting on more than +50% profits for Maybank and their profits will blossom into +100% in the coming resumption of world bank stocks' super rally (see cross reference link attached at the bottom of this analysis).

Reiterate:
MayBank is Ranked the Number 1 Top Bank  of Malaysia by The Donovan Norfolk

Side Note:
At target of $13.33, many of these early fans of Donovan Norfolk will have returns of more than +100% profits on such quality stocks.

Email ThisBlogThis!Share to TwitterShare to FacebookShare to Pinterest
Labels: Maybank