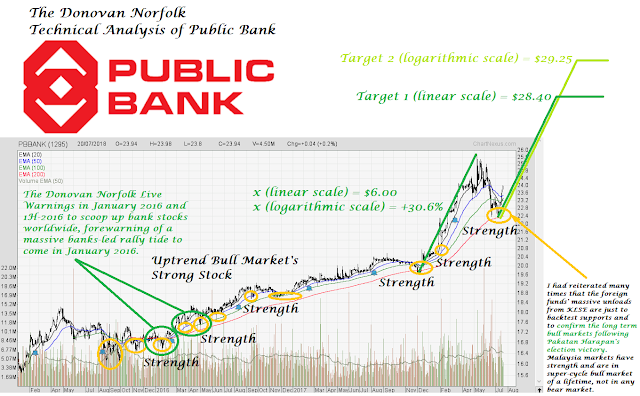 Attached is the updated Technicals for Public Bank -- The Donovan Norfolk Rated 2nd Best Bank of Entire Malaysia KLSE since the start of the year 2018. The dark green circled regions are my live calls in January 2016, 1H-2016 and 2H-2016 to scoop up bank stocks cheaply all over the world. Back in 2016, the herd were shouting for market crash and a bear market because the FED rate hikes caused a massive fear and markets were selling off. Singapore was to have technical recession back in 2016 too, and I was calling for bank stocks' buys.

Most of the followers are now sitting on around +50% profits for Public Bank and their profits will blossom into +100% in the coming resumption of world bank stocks' super rally (see cross reference link attached at the bottom of this analysis).

Reiterate:
Public Bank is Ranked the Number 2 Top Bank of Malaysia by The Donovan Norfolk

Side Note:
At target of $29.25, many of these early fans of Donovan Norfolk will have returns of more than +182% profits on such quality stocks.