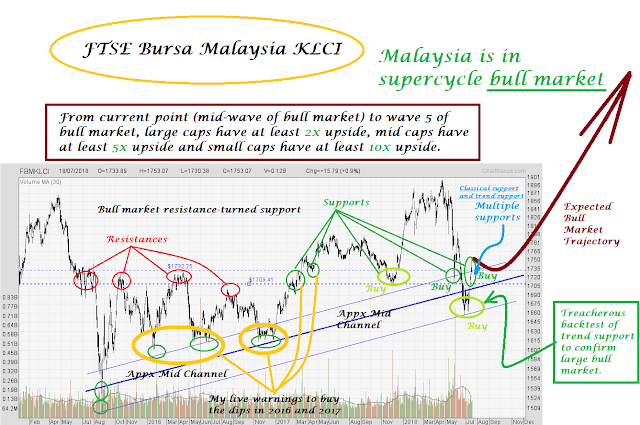 Attached is the Malaysia KLCI Index. The series of red circled regions and green circled regions show how the markets in Malaysia had turned from an originally intended bear market to a complete new up-trending bull market -- turning long term resistance band at 1709-1732 points to long term support band.

The yellow circled regions are my live warnings in 2016 and 2017 to buy cheaply while market herd were calling for bear market and market crash on rate hikes. This was where I called for maximum bullishness and loaded up good stocks such as Hibiscus Petroleum in 2016 -- at a mere 26 cents as much as I could (http://donovan-ang.blogspot.com/2016/10/hibiscus-petroleum-20-october-2016.html), and also called for it to bottom with the indices and the crude oil market. Many smart followers followed my live buys and loaded at 26 cents, and at current price of 91.5cents, they are sitting on +350% returns. My expectation is +1000% in returns from the bull market for the stock, and it has another 750% journey to go, which is a triangulation of just how much legs the bull market will go (my forewarning is that 2008-2018 is merely 1st leg of bull market, while 2018-2028 is 2nd leg of bull market where majority of gains are to be made for 90% of all stocks across the board).

As previously fore-warned that the sell-off by foreign funds in Malaysia following the Pakatan Harapan election victory would just be backtests of supports and for confirming long term bull market for the upcoming 3 years, and that market herd will mostly be interpreting it as bear market, the market as well as the herd's mentality have been enacting too per my fore-warnings.

Smart monies have now confirmed that the backtests of supports are successful and will be flowing back into the markets in droves. Most of the herd are bearish and full of conviction of a bear market now. This is when the equity market will be executing the brown trajectory per my financial modelling. The time is ripe. In addition, we are now at the confluence of multiple supports as highlighted in light blue on chart. The treacherous backtests of supports have been completed.