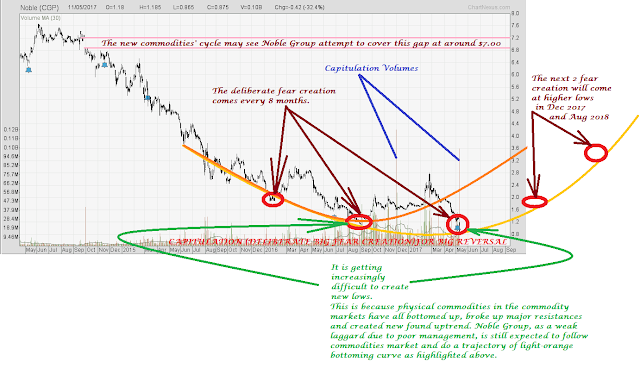 Attached above is the Technicals for Noble Group, a commodity stock that is listed in the Singapore SGX. Noble Group is making final capitulation volumes. Capitulation volumes are big fear volumes for big reversal. The capitulation has so far been successful in creation of maximum fear and despair. Noble Group has been creating this deliberate fear every 8 months (refer technical chart). However on closer look, it is getting harder and harder to make new lows even with high volumes now. This is probing of the market, and suggests big shorts in the markets will be using fear to cover shorts over the next 3 weeks. Any dip with or without much volume will be used for shorts-covering. This is mainly because physical commodities in the commodity markets have mostly either bottomed up or broken up major resistances and have created newfound uptrend. Noble Group, as a weak laggard due to poor management, is still expected to follow commodities market and do a trajectory of light-orange bottoming curve as highlighted above. The initial projected trajectory was dark orange; as it turns out, Noble is weaker than projected and is trying to follow the light orange trajectory. The next 2 fear creation are expected at higher lows and higher highs in December 2017 and August 2018 based on the practice of fear creation every 8 months. The 2 capitulation volumes are to be interpreted as big shorts-covering volume. These are not to be interpreted as smart money dumping-volume. We are still in a very strong leg of a secular bull market which is a rising tide that will lift almost all boats. 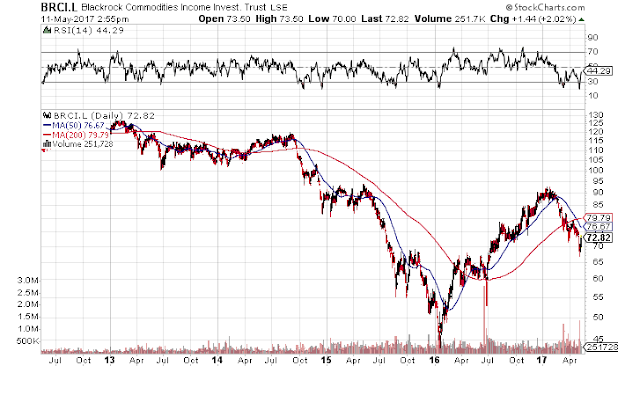 The leader is already at 46th percentile commodities recovery.
Recovery is suddenly sharp from year 2016 onwards. 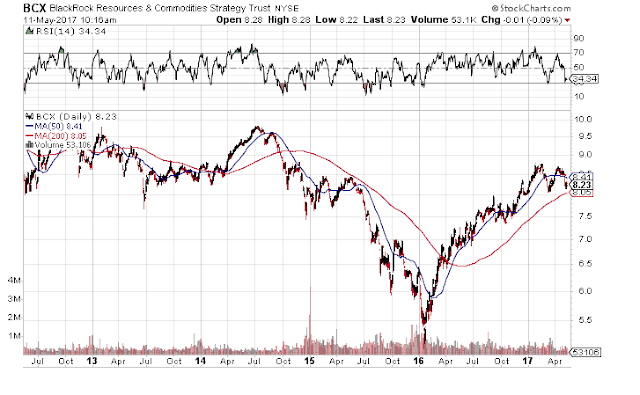 The leader is already at 64th percentile commodities recovery.
Recovery is suddenly sharp from year 2016 onwards.