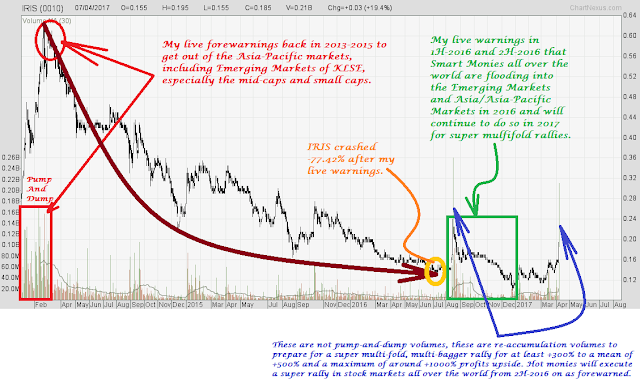 Attached is the technicals and volume flow of IRIS, a stock that is listed in the Emerging Market of Malaysia KLSE. The RED Boxed Regions are my live forewarnings back in 2013-2014 to get out of the Asia/Asia-Pacific markets, especially mid-caps and small caps. IRIS crashed -77.42% after my warnings. The Green Boxed Region is my live forewarnings in 1H-2016 and 2H-2016 cautioning that not only blue chips and big caps, but that penny stocks, small caps and mid caps will be scooped up by smart monies and hot monies all over the world, and that a super rally is in store from 2H-2016 on. I had also warned in 2016 that the top volumes will no longer be pump-dump volumes like 2013-2014, but instead they will switch to become re-accumulation volumes. It was also forewarned in 2016 that those in the top volumes will be the ones to look out for. IRIS is one such stock. It has healthy volumes. 2017 remains strongly a buy-on-dip for the stocks and equities asset class.

ADDITIONAL NOTE:
ESTABLISHMENT OF VERY HEALTHY VOLUMES IN 2H-2016 AND 2017

Email ThisBlogThis!Share to TwitterShare to FacebookShare to Pinterest
Labels: IRIS