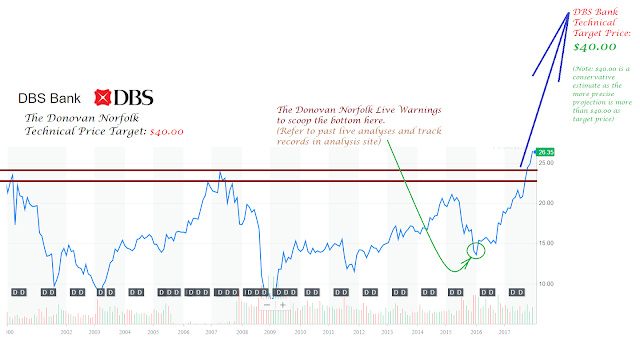 Attached above is the technical chart of DBS Bank from the year of 2000 to 2018. The green circled region is The Donovan Norfolk Live Warnings back in 1Q of 2016 with repeated reiterations in entire 1H of 2016 to scoop the bottoms. Back in 1H-2016, the world markets were crashing, 99% of all market participants shouted for crash and warned one another about market crash to come, and Singapore was poised to go into Technical Recession which Singapore eventually did. I flipped from my 2015 bearishness into high bullishness at the precision point in the green circled region, and warned that 1Q-2016 and 1H-2016 would make the major bottom for scooping up of quality stocks such as Asian Banks and Singapore Banks.

DBS Bank has broken up critical super-cycle resistance per my 2016 and 2017 forewarnings that it would do so, despite technical recessions and weak economy prevailing back then. The projected upside target now stands at $40.00 as target price and represents an updated target price over-riding the previous target price of $33.00-$36.00. DBS will become one of the big powerful banks in the region, in Asia and probably a titan in the world stage. In case you are wondering, the series of "D"s in the chart are dividends, big fat dividends given out consistently to shareholders. This is what makes a true blue chip -- fat dividends and significant price appreciation.

The target of $40.00 represents multiple-fold profits from my scoop-the-bottom buy-ins and still represents significant profits from current point considering that this is a heavyweight titan with bright profit growth prospects. In fact so many followers are sitting on very deep profits right now. Just last year December, one disciple, or you can call as apprentice of mine, made it into the millionaire list after years of hard work, picking up painstakingly my skills, techniques and knowledge from the top professional me.


The Donovan Norfolk Technical Rating:
Continue to be Very Bullish

Email ThisBlogThis!Share to TwitterShare to FacebookShare to Pinterest
Labels: DBS