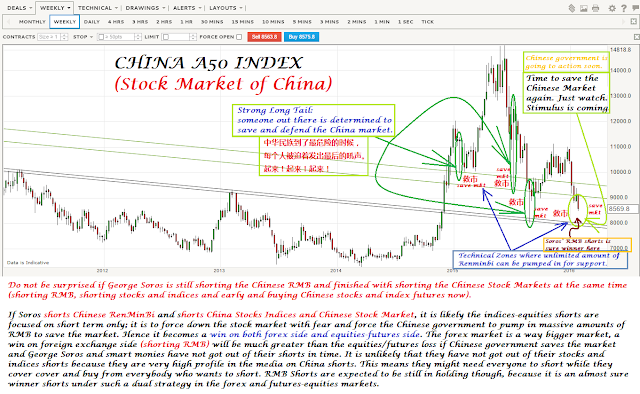 Attached above is the weekly chart of China Stock Market.
All illustrations and write-ups in the chart are replicated below, with addition of notes as well:

If Soros shorts Chinese RenMinBi, and shorts China Stock Indices and Chinese Stock Market, it is likely the indices-equities shorts are focused on short term only; it is to force down the stock market with fear and force the Chinese government to pump in massive amounts of RMB to save the market.

Hence it becomes a win on both forex side and equities-futures side. The forex market is a way bigger market, a win on foreign exchange side (shorting RMB) will be much greater than the equities/futures loss if the Chinese government were to save the market and George Soros and smart monies have not gotten out of their shorts in time.

It is unlikely that Soros and the smart money crocodiles have not gotten out of their stocks and indices shorts because they are very high profile in the media regarding China shorts now. This means they might need everyone to short while they cover and buy from everybody who wants to sell-short. They need people to sell, which explains the limelight.

RMB Shorts are expected to still be in the holding though, because it is an almost sure-winner shorts under such a dual strategy in the forex and futures-equities markets (refer additional notes below for reasons).

Side-note 1:
When PBOC (Chinese Central Bank) and Chinese government comes to intervene and drive off malicious speculation, they win too. This is because they buy up cheaply, and whips losses to the late shorts; RMB may suffer a bit, but it will further stimulate Chinese exports.

Side-note 2:
If China tries to save its market, it means they admit that their economy sucks and Chinese RMB is definitely over-valued; RMB has to be hammered down. There is more money released into the financial system as well.
If China do not try to save its market, the fear will further induce capital outflow, and RMB will automatically hammer itself.

Expect RMB to weaken again. George Soros to win in forex market like his track records.

In the end who is happy? George Soros, Wolves of Wall Street, Chinese Central Banks, Bankers, Western Smart Monies, Chinese Smart Monies. All synergising with a win-win and go laughing to the banks.

In the end who is sad? The naive ones who believe what financial crocodiles say, the fools, the ones who follow the herd and jump off the cliff, the common folks, the ones who do not put on thinking caps, the hard earned money of the commoners. The retailers.

When one is brilliant like Soros, money comes to oneself. The reverse is also true.
- Donovan Norfolk Ang