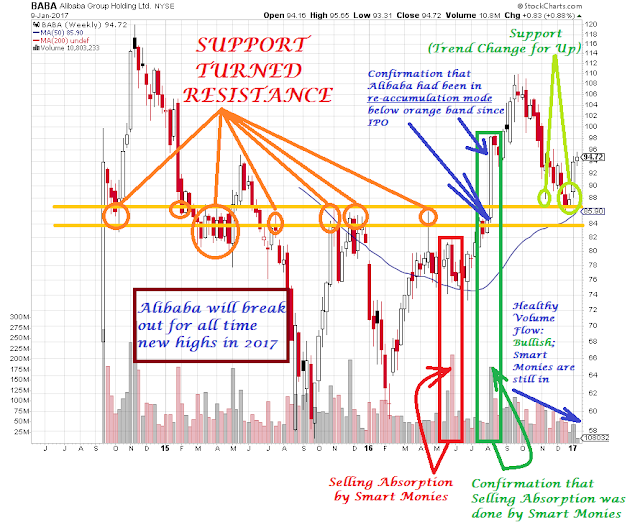 Attached is the Technical Analysis of Alibaba, an e-commerce titan that is listed in the New York Stocks Exchange (NYSE: BABA). In consistency with my live warnings in 1H-2016 and 2H-2016 that worldwide smart monies had been re-accumulating stocks all over the world before price actions even come, Alibaba has been undergoing re-accumulation mode since its IPO by hiding under the Orange Band of support-turned-resistance. There was even a high volume selling absorption soaked by powerful hands in the market (RED BOXED REGION). This was then followed by confirmation on the selling absorption to serve as a warning that this stock is a bullish stock and has executed a trend change confirmation (GREEN BOXED REGION). Refer to the series of BLUE ARROWED volume flow as illustrated on chart that follows: this is a confirmation that big hands are still holding all the accumulated Alibaba stocks and will be pumping up the stock based on volume flow. By induction on the volume flow since IPO, Alibaba will proceed in 2017 to break up all time new highs since its IPO in 2014.

LONG TERM:
BOTTOMED;
U-TURN FOR LONG TERM UPTREND
(In consistency with DNA Live Warnings of 1H-2016 and 2H-2016 that smart monies worldwide had been very aggressively re-accumulating stocks all over the world based on international funds flow)

Technicals:
Bullish at the current supports

Email ThisBlogThis!Share to TwitterShare to FacebookShare to Pinterest
Labels: Alibaba