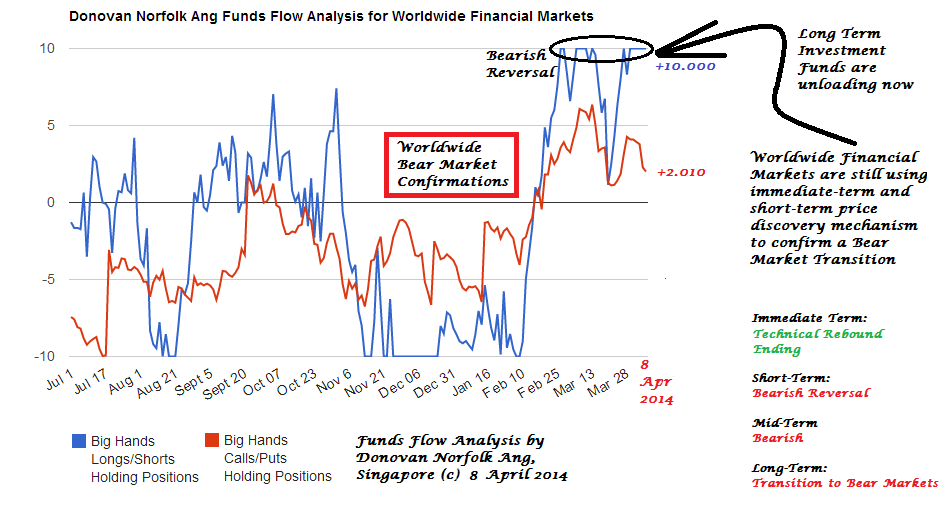 + WORLDWIDE BEAR MARKET CONFIRMATIONS HAVE BEEN MADE (WHILE YOU LEAST EXPECT IT because everything seemed to look rosy).

+ Big Hands are persistently at Bearish Reversal Mode and unloading bullish Calls yet again: bearish
+ US Markets sold off as per pre-warned 5 hours 10 minutes before it opened last Friday.
+ US Markets also sold off as per pre-warned 3 hours 00 minutes before it opened yesterday, Monday 7 April 2014 (S&P 500 -20.05 pts or -1.08%; DJIA -166.84 pts or -1.02%; NASDAQ -47.97 pts or -1.16%; in particular, Germany DAX plunged severely -184.91 pts or -1.91%).
+ Worldwide Funds Flow Analysis had been PERSISTENTLY in bearish reversal mode as per forewarned.
+ Possibility of dual bearish reversal in International Funds Flow now (Double bearishness).
+ This international Funds Flow movement persistently exhibits the characteristics of a transition to bear markets in worldwide financial markets.
+ The property bear market was forewarned in October 2012.
+ The current stocks and equities worldwide bear market was forewarned in November-December 2013.
+ The current stocks and equities worldwide bear market is being double confirmed and warned currently in April 2014.
+ Immediate-Term dead cat bounce is ending (short and unload on every immediate-term rebound).
+ All 3 Short-Term, Mid-Term and Long-Term trend outlook remain in same direction of being bearish-biased and downtrend-biased.
+ NASDAQ, European markets and Asian markets will remain weak as forewarned.
+ Get out and exit stocks and equities markets: technical dead cat bounce is ending for resumption of worldwide long term downtrend.
+ Worldwide financial markets have been executing technical price discovery to confirm a long term bear market transition.
+ Long Term Investment Funds and Long Term Asset Managers are also unloading stocks and equities based on Funds Flow Model (selling off on technical rebounds) as well as based on all previous capital exodus analysis proofs.
+ In holistic consideration of the macro-analysis: