The Kind of Secular Cycle worldwide financial markets are in (India as example): 2 August 2018 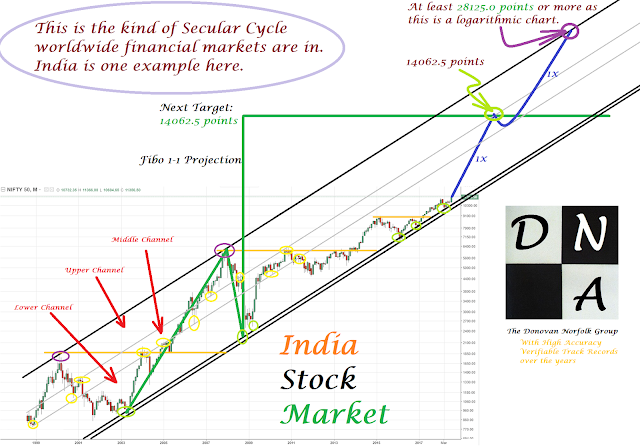 The Kind of Secular Cycle worldwide financial markets are in (India as example):
2 August 2018
(Click on Technical Chart above to Expand)

Attached above is the Technicals for the India Stock Market using NIFTY 50 Index for example to show the kind of Secular Cycle worldwide financial markets are in. I will be showing more other markets' Super-Cycle in time to come.

India is on the black channel trajectory as illustrated above. We are currently at 11295 points. The grey lines represent middle of the channel. The green lines are the fibo 1-1 projection which gives 14062.5 points as the next upwave target for the current resumption of worldwide bull market.

This upwave will coincidentally hit the middle of the secular cycle mid channel only in a few years' time which will see the next significant healthy correction. Secular cycle and long term cyclic bull markets will often end at the upper end of a channel. This will be when India NIFTY is projected to hit at least 28125.0 points using the most conservative approach of 1x-1x linear projection. Using a logarithmic scale projection the purple circled final target region is actually way more than that. However, I am giving 28125 points target because it is conservative and it will ensure my targets are hit -- under-promising and over-delivering.

If anyone tells you that we are into bear market or going into a stock market crash, I say, please do not bullshit with me. Worldwide markets are going into the most crazy stock market rally of a life-time -- never ever seen before.