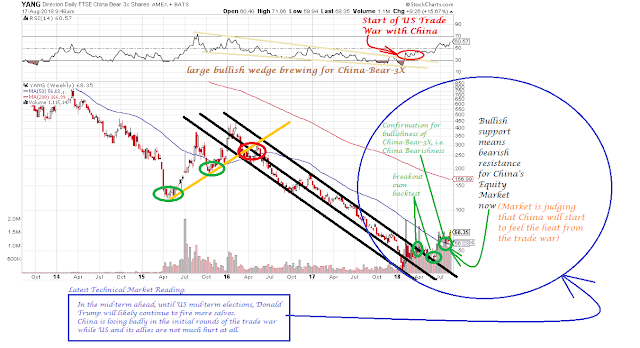 Attached above is the technicals for Direxion Daily FTSE China Bear 3X (AMEX: YANG) that is listed in the US Market. As this is Direxion-Bear ETF, upmove means bearishness for the Chinese Market. As this ETF is 3X in beta (wild volatility), it is often used for general hedging. Direxion Daily FTSE China Bear 3X had broken up the black channel, back-tested the channel resistance as newfound support (2nd green circled region) and found support at the 50MA (3rd green circled region).

The bullish supports of FTSE China-Bear ETF are also the bearish resistances on China Indices and Chinese Equity Market including the Hong Kong region. In the mid term ahead until the US mid-term elections, Donald Trump will likely continue to fire more salvos. China is losing badly in the initial rounds of the trade war based on latest development in the Market Technical Reading.

On the other hand, US market and the US economy is not much hurt at all, meaning that the trade war had actually been carefully planned, deliberated and executed such that other economies are ring-fenced as much as possible. This is why the current set-up in worldwide financial markets are of the following spectrum-characteristic now: US Market taking up the extreme end of the bullish scale and China Market taking up the other extreme end of the bearish scale. The rest of the world's markets fall in between. Those that are more friendly to US will be more bullish, and the vice versa will be true as well.