Donald Trump and Hillary Clinton Presidency 2016: What you can expect from here

If Trump gets elected, he will engage an economic war with China, he had already given the first salvo of what is to come if he is elected. Chinese Yuan/Chinese RMB will suffer. US economy will further be boosted through the fiscal policies focused on employment and taxation. US markets will continue to hit historic new highs. Trump's approach is a hardcore-hardliner approach.

If Hillary Clinton gets elected, through a series of re-negotiations, she will ultimately revive the Trans Pacific Partnership from the dead ashes and push for the ratification of the TPP in congress. The TPP had been toned down and sung in the same tune of Donald Trump because the medicine that Trump was selling was easier to sell. Clinton's core has always been the same: Pivot in Asia and Asia-Pacific. This has been the Democrat's core right from the start and they will not allow US supremacy to be undermined. Obama had already helped pave the important part of the road. The TPP will undermine China and its Chinese Yuan/Chinese RMB. The TPP will also further boost the US economy through the international trade and finance approach. US financial sector needs it. US markets will then continue to hit historic new highs. Clinton's approach is a softcore-softliner approach.

Based on funds flow posturing worldwide, regardless of who wins, US markets will sell off first in the short term to probe for supports and confirm the new long term supports. US markets will further thrust for new highs in 2017 and spearhead world markets to rally. The above is partly also why George Soros and many trading titans shorted Chinese Yuan (Chinese RMB) way in advance. A weak Chinese currency will stimulate Chinese stock markets to join the world market rally.

Two Trading-Investing Approaches are emerged as a result:
1. US markets dip and correct slightly to shake out weak holders. The dips are for buying and will enable for re-accumulation for the 2017 worldwide stock market rally (long term uptrend).
2. China currency, the Chinese Renminbi, will be battered again, and remain bleeding in the mid term and long term. Short Term Rebounds in the Chinese RMB (CNH) post-US-election are for re-establishment of shorts to join the George Soros Boat. 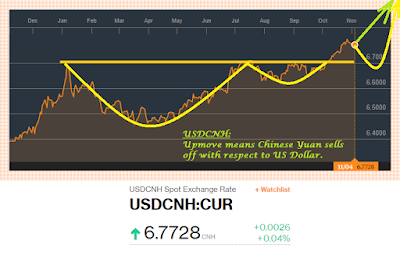 (Note that when Chinese Yuan/Chinese Renminbi sells off, it is generally bullish for Chinese stocks)

Email ThisBlogThis!Share to TwitterShare to FacebookShare to Pinterest
Labels: US Presidential Election 2016