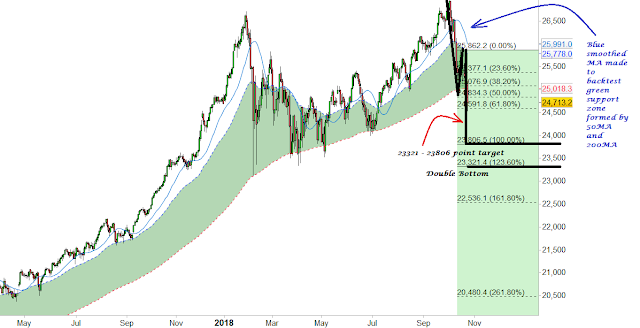 25 October 2018, Thursday, 6.10am Singapore Time
(Click on Technical Chart above to Expand)

Attached above is the latest development in Dow Jones Industrial Average (DJIA), giving a glimpse of general equity market conditions in the US. Based on the current short term wave that is being formed, this wave's target is tentatively at 23321-23806 pts band to end the US correction. This will coincide with a double bottom, forcing the smoothed MA in blue to backtest yet again the green support cloud formed by the 50MA and 200MA. While Asia Markets and Emerging Markets are trying to bottom out, the US is merely doing a late retarded correction (catch-up correction) as a signal that it is the strongest market in the world. Seems like the US equity markets would not like to see a Trump-victory for the upcoming US midterm election, preferring to rain and drench the Republicans and making the rain more like sweet dew for the Democrats.