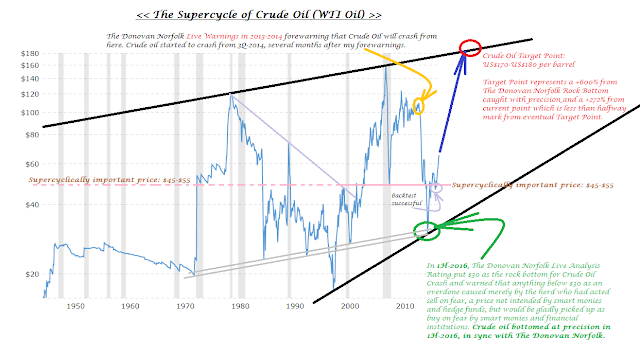 Attached above is the Super-Cycle Trajectories of International Light Crude Oil (WTI Oil). The Dark Yellow Circled Region is The Donovan Norfolk Live Warnings in 2H-2013 to 1H-2014 fore-warning that Crude Oil would crash soon when it was breathing above the $100 mark. A few months after my final warnings, crude oil started to crash from 3Q-2014. During 2013-2015, I had also forewarned that the impending weakness in crude oil would generally cause Asia markets to be weak and that would easily cause most people to lose money more than they would like to make money in investments and trades, this was enacted in Asia as well after my cautions. The importance of crude oil and its cascading multiplier effect to economies just cannot be under-rated.

The Green Circled Region is The Donovan Norfolk Live Analysis Rating in 1H-2016 putting US$30 per barrel as the rock bottom for Crude Oil Crash to end. Back then, the entire world shouted for US$10 per barrel crude oil. I had cautioned that anything below US$30 would be an overdone that had been caused merely by the herd who had acted sell on fear, a price not intended by smart monies and hedge funds, but for which would gladly be picked up as a buy-on-fear by smart monies and financial institutions. Why was The Donovan Norfolk Analysis so precise and deadly in accuracy? Refer to the grey support lines and you will learn why. Crude oil bottomed at precision in 1H-2016, in sync with The Donovan Norfolk Technicals for the universe of all asset classes interlinked.

In sync with the Trump-inspired weakness of the USD as analysed earlier, Crude Oil will be gunning for the US$170-US$180 per barrel target mark. This Target Point represents a +600% from The Donovan Norfolk Rock Bottom caught with precision back in 2016 (refer to past track record where I bought) and a +272% from current point which is less than halfway mark from eventual Target Point.

On an on-par basis, even blue chip oil-related stocks, large cap oil-related companies and elephants and mammoths have another +272% upside as the oil bullishness will trickle down with much larger multiplier effect generally. This kind of multiplier effect will also cascade in breadth to primary materials, raw materials, industrials, banking and finance, and many sectors in breadth. Even penny stocks and small cap companies will finally gain this time round.

On also an on-par basis, when this is not even the half-way mark for crude oil target, another +100% profits from all oil related companies regardless of their size of capitalisation is a conservative estimation and it will be highly achievable. Emerging Markets and Asia Markets will benefit greatly from the entire movement. Asia Equity Markets will start to create tsunamis of new highs every other month in 2018 and 2019 and with some likelihood into 2020 as well. Sustained historical highs like those in US can be expected for the rest of the world, and especially in Emerging Markets and Asia/Asia-Pacific.

The 5-year crude oil chart above shows how the crude oil price actions had interacted with the Super-cyclic $45-$55 critical band of resistance-turned-support in detail. Crude oil price actions made a first trinity of support cushions in 2H-2016 at the super-cyclic resistance-turned-support, with smart monies absorbing all sells in the financial markets on crude oil (deliberate intention).

The second trinity of deliberate buys occurred with high volumes in 2H-2017 (refer to 5-Year Crude Oil Chart above), a double confirmation of strong buy intentions, strong buying power and strong-willed holding of the market. The confirmation of mark-ups came towards the end of 2017 with the break-up of orange trendline resistance. This is a 3rd confirmation and a confirmation on the double trinity of intentions as highlighted previously (bullish).

With everything in sync in the financial markets, crude oil will be gunning for the $US170-$US180 per barrel target. It will break up the $100 psychological resistance. The difference between this time round and the previous $100 per barrel mark in 2014 is that majority of the market will be bearish on crude oil and shorting crude oil at the US$100 area this time round, when previously before the crash they were buying without fear but greed. This time round there will be so much fear of ghosts and crashes. This is because the 2014 crash history will still be fresh in their mind and the well-spun stories of renewable energy will continue to be so convincing that people will continue to be bearish of crude oil until crude oil eventually hits the high ground target. From $100 per barrel mark, crude oil will instead not follow the 2014-crude oil crash history, it will break the 2014 trend and further rally to US$170-US$180 per barrel to silent all its critics and burn short-sellers once and for all. Renewable energy may take over only from there, i.e. when everyone tramples the renewable energies as myths.

The Donovan Norfolk Technical Rating:
Very Bullish
(Expected to rally for the rest of 2018 and into 2019)

Additional Note:
The Supercycle Chart of Crude Oil here is the charts of West Texas Intermediate (WTI or NYMEX) Crude Oil prices per barrel dated back to 1946. The price of oil shown here is adjusted for inflation using the headline CPI and is shown on a logarithmic scale (log chart). The current month is updated on an hourly basis with today's latest value.