Short Term Technicals of S&P 500 and Important Write-up (A sharing of my past 17 years of stock market experience and insight as well): 25 December 2018, Tuesday, 3.33pm Singapore Time 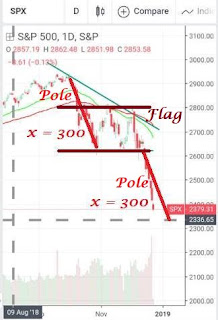 Short Term Technicals of S&P 500 and Important Write-up (A sharing of my past 17 years of stock market experience and insight as well):
25 December 2018, Tuesday, 3.33pm Singapore Time

Attached is the Short Term Technicals of the S&P 500 Index. The S&P 500 is doing a short term standard flagpole-flag-flagpole correction. This technical price structure of pole + flag + pole is reaching its price satisfaction zone soon at 2300-2330 points to end the correction. In the longer term, the bull market price structure is still strong. Someone made a special effort to organize and re-summarize all my recent teachings, and shared on his Facebook Wall with his readers. I felt his summary of my teachings was very well done, so I am sharing it here, and further to that I have added quite a number of substantially important points at the ending eight paragraphs. This represents my most sincere effort in sharing my knowledge and experience:

Almost everyone, including every single media, is calling for market to tank, crash or be bear market in 2019 based on their simplistic definition of bear market definitions. As a matter of fact, this correction is considered healthy. From the technicals of S&P 500, the correction is ending soon. This is where funds are looking to buy and where there will be sellers around the world joining a stale correction. 95% of the world is successfully being brainwashed bearishly by 95% of the world now.

Do not only use technical analysis to judge it is bear market. It is naive and high risk to just use technical analysis to declare bear market, as it is shallow and not holistic. Technical analysis side is bearish, yes, but funds flow analysis and fundamental analysis are still STRONGLY positive, and economic projections in my financial model (similarly, economic projections of many high end economic institutes as well) still points significantly to expansionary cycle (bull market cycle). TA = bearish; FA = bullish; FFA = bullish; EP-2019 = expansionary + govt fiscal stimulus = bullish. China is now the first to declare to use fiscal policies (big tax cuts) as stimulus for 2019, in line with my previous anticipation. (Refer my recent fore-warnings that governments worldwide will use fiscal policies in place of monetary policies to stimulate growth, uptrend and bull market).

The China Treasury had scooped up the Chinese Market not long ago. The size is not small. It is significant. They had declared the operation previously. Now the US Treasury will also convene a Plunge Protection Team. The US Treasury is forming this Plunge Protection Team with the top 6 biggest banks of the US -- Bank of America (BAC.N), CitiGroup (C.N), Goldman Sachs (GS.N), JP Morgan Chase (JPM.N), Morgan Stanley (MS.N) and Wells Fargo (WFC.N).

From my past 17 years of stock market experience, my young years till my middle-age years of now, the Central Bank, Finance Ministry and Treasury of any country does not support the market or scoop up the market if the world is to be entering true recession or bear market of any form. They will be more than happy to let it crash if the cycle had truly completed and Central Banks are in good shape. They intervene only at the bottom or at mid-point stage of an economic cycle when malicious short-selling or malicious opportunistic puts from particular groups are causing unnecessary fear, and these malicious shorts/puts are not warranted and not allowed to derail the economic expansionary cycle.

Plunge Protection Teams (PPT) never come in during the start of a bear market, they also do not come in during early bear market phase when market bear has a long journey of beating to go. Plunge Protection's entries almost always mark an end to malicious activities and also mark a bottomline to these malicious activities. Their entries also almost always mark a start of the next large wave up.

Only large wave means the Treasury and the PPT efforts are worth it. Only large wave up justifies large scale buying by the PPT. This is often guaranteed behind the back by governments and their future fiscal policies to come. On 6th October 2008, the working group of Plunge Protection Team issued a statement indicating that it was taking multiple actions available to it in order to attempt to stabilize the financial system. October 2008 to March 2009 marked the bottoms worldwide for large scale up-wave. This is not the only example that I can list. I can list so many examples from my rich experience and from my in-depth researches of the markets.

As the US Treasury and the Plunge Protection Team involving all top 6 of the biggest banks are convened (reiterate: they never bother to buy during any bear market phase, they only buy when a large scale up-wave can be guaranteed), this represents a secular bull market's 【mid-point】 being confirmed now. Remember, as I had pointed out, China has done this recently already. Now US as well.

A secular bull market's pivoting mid-point is being confirmed by both US and China now, both being the top two largest economies in the world. Where they come in are pivoting support levels that will hold for a long time for the next large wave up (justification for the PPT/Treasuries' large scale buying support). The last time this happened was Oct 2008-Mar 2009, yielding for multi-fold bull markets.

China is applying strong fiscal stimulus. So is the US, more fiscal policy tools to come from the US government. No banks or central banks will apply monetary stimulus at this stage of the cycle because this stage of the cycle is supposed to be QT (Quantitative Tightening) and not QE (Quantitative Easing). It is the time of the economic cycle, as per all past cycles, that governments use fiscal policy tools and let the banks and central banks earn in the 2nd half of a big bull market when the monetary tools are supposed to tighten and private sector is warm though not fever hot. Second half is where majority gains are made (Banks and Central Banks receding from monetary tools and all other entities within the GDP formula of C+I+G+X-M take over). Monetary tools slowly withdraw, fiscal tools take over. This is how it all works at mid-stage cycles. Bear market? Not a single chance. The increased application of fiscal tools is where walls of worries can always still be there (characteristics of bull market) and where Treasuries and Plunge Protection Team's working mechanism have safety and guaranteed profits for the future.

Bear market also will not take place when monetary tools are withdrawn, fiscal tools withdrawn, private sector is in gear 1 to gear 4 of a 5-gear engine. It slowly creeps in only when there is no monetary policy clutch, no fiscal policy clutch, and private sector by itself is combusting at full gear 5 of a 5-gear engine, and running real hot. By then, central banks' balance sheets would have been shrinked, bright and ready to save the world again. Recession, Market Crisis and Bear market then will be allowed to rear its head.

As reiterated, this expansionary economic UP-cycle is a 【TIDE】-- It cannot be stopped. The Federal Reserve's large balance sheet also needs another 2 more extremely large upwave before it can be shrinked effectively and efficiently. Markets are not allowed to tank or go into bear market, otherwise even the Federal Reserve will be in trouble. And no casino operator since time immemorial goes into trouble, especially the FED.