The following article is a concurrent analysis of 6 different asset classes, namely:

Attached below is the Bond Yields of the Singapore 10 Year Treasury Bills: 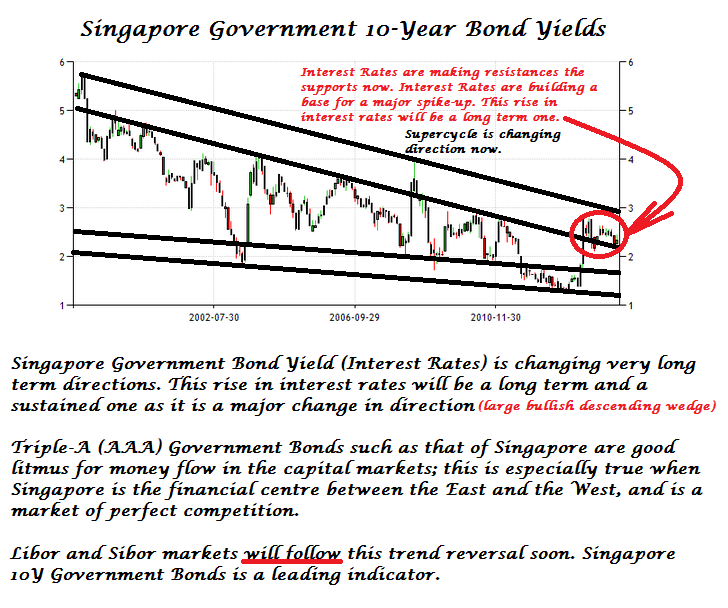 It is important to reiterate that the SG 10Y T-Bond yields, as highlighted using the RED CIRCLE above, is making the resistance-interest the support-interest now. Higher interest has found a new base and is consolidating at these newly found higher bases. When such a determined yield move occurs with consolidation and is entrenching at higher bases in especially AAA-rated bonds, it is an important market signal of international receding monetary tide.

The party is wrapping up and the music is stopping. In the Old MacDonald's Farm, fattening chickens and pigs that have been reared to a bubble size in many emerging economies, especially those that have been lax in the financial regulations, are ripe for slaughtering.

As the US economy recovers, rates have only one way to go and that is to muddle its way up. US Dollar will, henceforth, have a continual rising pressure as the tap is tightened during a recovery. Cheap money that were used to stimulate growth and speculation in the Emerging Economies will have to be consistently de-leveraged. This creates a major receding tide in capital flows. This explains in part why even high quality AAA Treasury Bills such as those of Singapore is being liquidated, pressuring bond yields to rise, and more importantly, the rise is to the tune of making bond yield resistances the supports now.

In fact, such is the scale of the receding tide to come that rising yields do not attract the Smart Money and Hot Money anymore.  These rising yield supports have been building a strong base and will now be used to launch further North bound rates explorations.

In addition, when the yield has formed such a strong base at a higher low as illustrated in the Singapore 10Y T-Bill Yield Curve above, it will break up the long term low-yield cyclic resistance of 2.5%-3% (Double Black Lines).

What is the eventual target? Bond yield of around 6.0-6.5% will be the projected target based on the technical break-up. This represents a significant rise in interest rates over the long term.

As per maintained, this upmove in interest yields will be within a newly formed, sustained and long term uptrend. This essentially means Bonds will continually be sold down progressively under a new long term downtrend to achieve such a yield.

In fact, many AAA-rated bond yields internationally will be experiencing what Singapore Treasury Bonds is going through currently. Where strongest triple-A bonds go, so goes the universe of weaker sub-AAA bonds or under-par Bonds.

This essentially also means that hot money and long term investment money in the capital markets will be outflowing from Blue Chips, Dividend Stocks and REITS in general.

The change in direction of worldwide AAA-bond yields will soon be spilled over to the more laggard international LIBOR and SIBOR rates.

Attached below is the 3-Month SIBOR rates. A typical property loan in Singapore for instance is currently pegged at 3M-SIBOR rate plus an additional 1.25%. 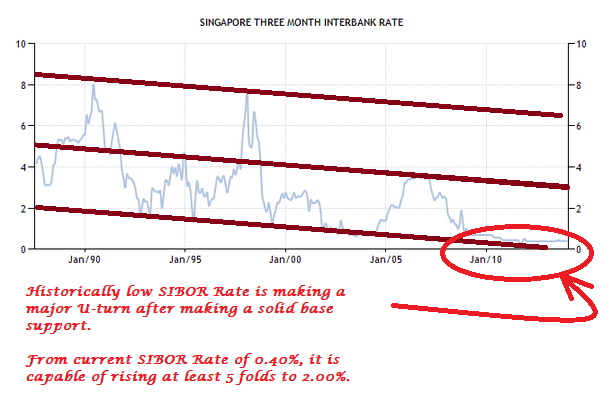 The SIBOR rate is currently pegged at around 0.4% with historical low at 0.25%. Historical high is at around 8%.

What is the implication?

When the SIBOR takes flight from here (currently at around 0.4%), a mere normalisation path towards 2.00% will represent a 5-fold increase in SIBOR rate and an 8-fold increase from the 0.25% historical low.

As prices fall and interest rates continue to rise, demand will also sublimate while selling pressure will continue to accumulate. In fact this has already happened since my property market warning in October 2012, several months before physical properties peaked and turn down. Selling pressure has taken over and this will be a long term downtrend based on the Bond Yields and SIBOR projections.

Note that in the world of Economics, market prices can also be affected by expectations of the future. When one expects future prices to fall, they will continue to postpone any desire to purchase if it is non-food items. This translates into layers of buy queues continually withdrawn over time with rising interest rates: support lines will, in effect, continuously break down. Price expectations, in itself, pose a form of deterrence from buying, consumption and investments. A vicious cycle will often be set up and mortgages held by banks will also slowly turn into sour assets (depreciating in nature).

Financial markets will be absorbing the points mentioned above and be baking them into the prices of all asset classes. This will be reflected by both a peaked home currency and peaked stocks-equities markets of the domestic economy. We will proceed to analyse both domains respectively.

Attached below is the forex monthly chart of USDSGD. The definition of up-move and down-move in the USDSGD chart is as explained below. As the SGD is on the right hand side of the forex pair of USDSGD, a down-move in USDSGD means a depreciating USD and an appreciating SGD relatively. 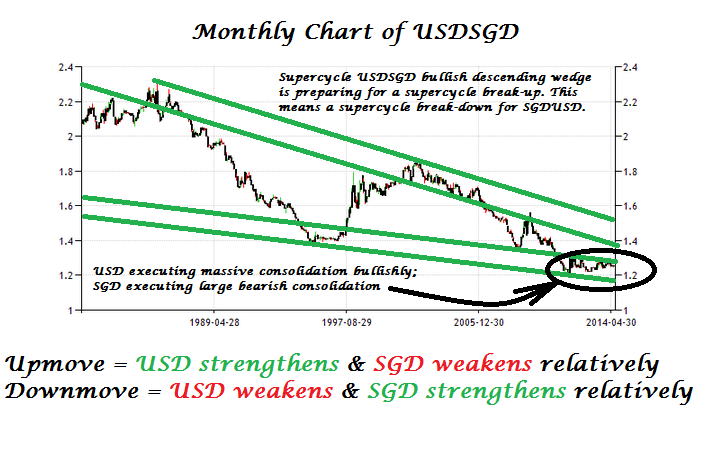 The Forex Chart of USD against the SGD shows a Supercycle USDSGD Descending Wedge awaiting a major break up. This essentially means that the Singapore Dollar, like many other currencies against the US Dollar, will suffer a very major break down soon (breakdown of SGDUSD is equivalent to break up of USDSGD).

The change in trend as illustrated by the forex chart structure above depicts a major and significant trend change, much like the 10-Year Treasury Bond Yields. This weakening of the SGD, as well as all other currencies against the USD, will be a long term supercycle move as the Greenspan-Bernanke policies since 2001/2002 call to an end.

In fact, the region in the USDSGD chart that is marked with a BLACK CIRCLE above shows a serious anomaly with respect to all the massive QEs conducted. It is highly likely that the financial markets (Big Hands, Smart Monies and Market-movers) know that all is not well and trouble is coming. As Asia has enjoyed low rates and cheap money since 2001/2002, the coming receding tide may trigger a systemic financial crisis outside of US' doors. This may be a Eurozone Crisis 2 (EC 2), Asian Financial Crisis 2 (AFC 2) or a South-East Asia Financial Crisis (SEAFC 1). When the tide recedes enough, the institutions or sovereignty which swam naked will be caught out. In short, the financial institution that lent out or borrowed at cheap rates incessantly and excessively could find itself facing trouble.

Stocks, equities and property markets will be transiting into bear market as warned in end-2013 and early 2014 to exit at the peak.

There are currently 2 targets for the Straits Times Index (STI).

The first target is 1512.81 points where the RED COLOURED band of supports hold. This is a bear market target that is near the 2008 US sub-prime crisis lows. A target towards the 1512.81 points represents a -53.5% fall from current point. All other markets will have around this magnitude of fall as a best case benchmark.

The second target is 891.48 points where both the BLACK COLOURED AND RED COLOURED supports do not hold. This will be a bear market target that is near the 1998 Asian Financial crisis lows. A target towards the 891.48 points represents a -72.6% fall from current point. All other markets will have around this magnitude of fall as a worst case benchmark.

Properties, Banking and Finance Sector will lead the falls. This is especially so for all financial markets outside the US. Attached below is the FTSE ST Real Estate Index.

The Bear Market move in properties was warned by me in October-2012, half a year before it took place at the peak. The physical properties market proceeded to peak in 2013 after the October-2012 warning.
Refer to the live and time-stamped analyses attached:
http://donovan-ang.blogspot.sg/search/label/Singapore%20Property

How will properties, banking and finance sectors fare under a Secular Trend Reversal of Greenspan-Bernanke policies? Attached below are Long Term Secular Trend movements of where we will proceed from here.

Capitaland has achieved a Secular Trend peak at around $7 in the previous 2007 Bull market peak. The subsequent cyclical peaks of 2010 and 2013 had both been completed with success too. These lay the set up for a major long term trend bear market. In the coming Secular Trend Bear Market, which moves in sync with the Secular Trend Reversal of Low Rates (Cheap Money), property stocks such as Capitaland will have a near 100% probability of breaking critical supports such as those of the triple black line support band above. From current point of $3.20, two targets of Capitaland in sync with long term STI targets are:

Special note on Capitaland:
Its privatization of CapmallsAsia (CMA) is at a high price (near peak price) in 2014 as markets peak in 2014. This means the acquisition does not make sense in an economic point of view.
CMA may not be the only bad business decision. Added up, these may worsen the future sell off in Capitaland. Note that Capitaland is just one sampling example based on technical analysis. Many other Asian property companies may had over expanded or over leveraged during historic low rates; when the tide turns, the ones that swam nonchalantly naked during the past few years will run into problems.

Below are Secular Trends of the 3 local banks in Singapore: UOB, DBS, OCBC.

From current point of $22.52, two targets of United Overseas Bank (UOB) in sync with long term STI targets are:

From current point of $16.75, two targets of Development Bank of Singapore (DBS) in sync with long term STI targets are:

From current point of $9.55, two targets of Oversea-Chinese Banking Corporation (OCBC) in sync with long term STI targets are:

Note in addition that there have been initial waves of massive capital exodus away from financial markets, stocks and equities. Attached below are added examples, with reference to Citigroup (US), HSBC (HK & UK), BoA (US) and JP Morgan (US) to complete the picture:

In summary: Where Triple A Bonds Go, So Goes The Rest of The Asset Classes". Secular Trend Receding Monetary Tide means that the money out there do not even care about getting quality asset classes anymore, they will not care about stocks, equities, reits and properties. This is same analogy as: if blue chips are forsaken, all other chips will generally be forsaken too. 95% majority out there will be caught out. As illustrated, since this is a major, long term secular change in trend, capitulation of stocks, equities and properties could happen as much as -50% to -80% off current market prices under such a long term supercycle secular trend change.